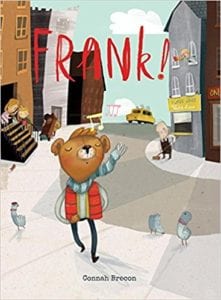 ‘Better late than never!’ Well...that’s what this amazing book reminds me of, as well as any other person who went to grade school and high school and really didn’t want to get up on time to attend. (Yup, that’s just about everybody.)

Frank is one of those boys who is just a tad bit late for things. He’s not being mean, of course; he’s simply busy. And his imagination is a true barrel of fun. This is not only a boy who gives excuse – this is a boy who makes sure to think up the most amazing stories possible so that everyone knows how hard he works...even if he’s not ‘working’ where he’s supposed to be working at the time.

His teacher rolls her eyes, of course, upset that he’s always late. But, you see, Frank is a hero. This is a young one who loves to help the world. Everyday people who surround him are cranky; they are always worrying or yelling about something. But Frank keeps the smile on his face and always remembers that helping others is far more important than being angry or rude all the time.

When school begins, Frank has a rough first day. Unfortunately, he doesn’t actually show up until everyone else has gone home. But as the story progresses, Frank gets better and better – closer and closer to being on time. You can’t fault him, though. Frank saves kittens, stops bullies...and even faces down a massive, giant zombie lizard king. (Not a lot of kids can say they did THAT!)

Allowing for the light to shine in and let go of the constant worry, nervousness, etc., that everything from jobs to paying the bills brings on, is something everyone can learn from Frank. Life is far too short, and being able to enjoy the good stuff is something we all should take advantage of.

The author of this story is a young boy, himself. He is an illustrator as well as a writer of stories, with one already out there that people absolutely love. And, hopefully, since his stories are absolutely charming, his illustrations are darling, and his humor is most definitely needed in this world – this young writer will continue for a long time to come.

Quill says: Fun with a capital ‘UN.’ Frank most definitely helps everyone understand that imagination is necessary; especially when it’s time to stop and smell the roses!