Force of Nature: The Unlikely Story of Wal-Mart’s Green Revolution 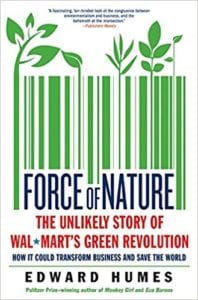 Force of Nature: The Unlikely Story of Wal-Mart’s Green Revolution

An engaging, surprising story about the largest company in the world and how they have attempted to change their image.

As this Pulitzer Prize winning journalist begins, he takes us through - step by step - how the corporate giant Wal-Mart first began, as well as the troubles that the company experienced. And, most importantly, how Jib Ellison, a corporate consultant who turned into a true sustainability guru helped Wal-Mart better their image. Jib has made a career - a life, rather - of proving to companies that they need to “go green;” that the people of the world are truly interested in being ecologically sound.

The amazing amounts of data where Wal-Mart is concerned is mostly bleak. Wal-Mart has been seen for decades as an overlord - a tyrant that has had major lawsuits brought against them. In essence, a great deal of the world believed that Wal-Mart was an incredibly “secretive” company, offering no information on their business and corporate practices to the people. When Sam Walton, Sr. “invented” Wal-Mart he believed in the whole image of the “five-and-dime” store - with open door policies and a place where employees were called associates. Over the years however, with expenses skyrocketing, the whole ‘Made in the USA’ turned into a catastrophe.

A few years back, Dateline uncovered - live - a location where Wal-Mart was actually doing outsourcing, and child labor was being used. Wal-Mart’s stock fell overnight. Federal agents raided sixty-one Wal-Mart stores at one point to find 250 undocumented workers on the night shift, which caused even more lawsuits. There were air pollution lawsuits regarding the “output” of Wal-Mart stores; they were also sued because they were not meeting the minimum wage requirements and had to pay back all the employees who had not been treated fairly.

Now, for a large corporation, perhaps lawsuits are normal. But for Wal-Mart, the real scare came when their shoppers fell by over 8%. People were angry beyond belief at what this powerful overlord was doing, and swore to stop giving Wal-Mart their money.

Enter…Jib Ellison. Jib was the “go green” man - the CEO whisperer, some call him. Jib had meetings with huge companies such as Nike, Sony, Microsoft - big names, and over half of them decided to use Jib’s services. Wal-Mart was one. A few unbelievable facts about Wal-Mart given in this book include things such as, when they unplug the lights in their employee vending machines, $1.5 million is saved in electricity every year.

Almost overnight, Wal-Mart began to rebuild their corporate ‘core’ business model and it has extended to their ten thousand suppliers. From Wal-Mart changing the way their diesel trucks emit toxins, to stocking only concentrated detergent to sell, Wal-Mart has been slowly climbing out of the ‘muck’ they put themselves into. Even when Hurricane Katrina devastated the South, Wal-Mart appeared with food, bottled water, and other much-needed provisions and, to everyone’s surprise, there was no PR spin. Wal-Mart accepted no ‘pat on the back’ for their contributions, which was one of the first ‘looks’ at a company that was learning every day that; although they had been the force of nature - the people/their shoppers had taken over the helm, and Wal-Mart had to straighten themselves out.

This author has done a marvelous job as far as research, highlighting the good and bad points of this global corporation, and does a wonderful job of laying out all the information so that readers can truly see the inner workings of a company that almost, overnight, went from rich and powerful to Chapter 11 status…simply because they didn’t listen to the masses.

Quill Says: Although the future looks bright for Wal-Mart’s image, they will most definitely have to continue on their path to sustainability and NOT let history repeat itself. A very interesting read!