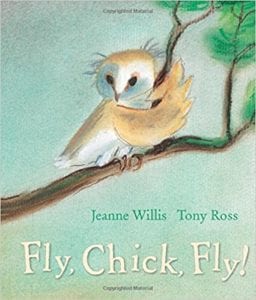 In a deep forest an owl peered out from a hole in the middle of an oak tree. Who-o-o! She was sitting on three eggs on a nest she had built. “She sat on the eggs all day and night. / For thirty days and nights. / Every dawn, every dusk, Father Owl went / hunting to feed Mother Owl.” It wasn’t long before the first chick hatched when the trees began to bud. The second came when they had blossomed and the third arrived when the blossoms fell to the ground. The littlest chick struggled to get out of his egg as the older ones looked on. Who-o-o would be the first to leave the nest?

Father Owl hunted and brought back food for Mother Owl to feed her chicks. Throughout the season the “chicks grew and grew,” but the littlest chick was ... well, still the littlest and wouldn’t leave first. When it was time, the first chick left the nest as Father and Mother Owl watched as she struggled to fly over the green blackberries, “but then she flew!” The second chick left “when the blackberries were ripe.” He swirled through the air, tumbling toward the ground, but he too flew. Autumn had arrived and it was time for the last chick to leave, but he declared, “Not I!” Would the littlest chick ever leave the nest?

This delightful, lyrical tale will delight little chicks and children too. Like the little chick, young children sometimes are tentative and frightened in new situations. The littlest chick was afraid a crow or a train might hurt him and children often have similar, somewhat groundless fears. I loved the heartwarming twist at the end of the book, something that will bring a smile to the reader’s face. The whimsical pastels are quite charming and sometimes lightly humorous. One of my favorite scenes is when Mother Owl is seen tugging at the littlest owl’s tail feathers trying to get him to let go of a tree branch and fly away. This is a beautiful little tale that would make a perfect story for circle or storytime!

Quill says: This adorable, heartwarming tale just might prove to be a bedtime favorite!