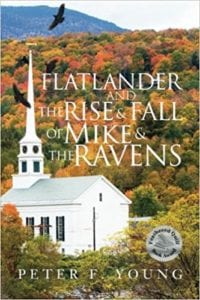 This book is about a simpler time. It is nostalgic. But it is also quite modern when it comes to the meaning of the word “passion.” Peeling off the layers of this story, readers will find that at its core is a tale of deep, true love that one man, from almost the very beginning of his life, had with rock-n’-roll. You remember parents calling it the “devil’s music” at one time? Yes, we can laugh about that now. Rock-n’-roll is a staple in the United States, as well as everywhere else around the globe for that matter. When looking through history books, rock music claims some of the best performers – from singers to guitarists to writers to all three – who built careers that lifted into the stratosphere and became legendary.

With Peter Young’s book, he takes readers along the path of a “war baby.” This is the group born between 1938 and 1946. War babies were not the “boomers.” In fact, they were too young for the Great Depression, as the author pens, and had not lived long enough to really encompass the pain, fear and victory of WWII. The 50’s music was where it was at for them. They were certainly a part of 60’s culture (free love, free drugs, sex, etc.), but not quite young enough at that time to really throw themselves into the mix and get lost in psychedelic colors and LSD. Long hair, yes. Yet not the Bon Jovi 80’s generation, and they were the first group to really love playing with their band out in the garage until Mom and Dad told them to be quiet and go to bed.

For a boy born in Massachusetts and moving on to grow up in very quiet, very mundane Vermont, Peter Young was a Flatlander (a person living in Vermont who is not actually born there). He embraced the world of music, as well as the African-American sound and culture that came onto the scene and brought with it performers who added a soulful vibe to the world. The band names change for he and his pals, but readers will absolutely love to hear about "Mike & the Throbs," and their evolution. They will love going to New York and feel that excitement when a boy from a small town reaches for the stars and gets that letter from a corporate bigwig in the “industry” giving him and his band a chance to be on TV. (Boys in NYC without parental supervision is a whole lot of fun to read about.)

From concerts by "Mike & The Ravens," to albums that hit the shelves, to courtrooms, to the feelings that run through a person when they see the ultimate car, a1957 Pontiac Star Chief Bonneville Convertible (**drool**), these pages prove that life, like music, is always surprising, with each decade offering something fresh and new. The culture has changed now. Nothing stays the same. But Young tells it all: growing up, gigs, successes, failures, long-term friendships, and bonds that are made from time, work, and a shared passion that not many have the good luck to ever own. Moments in this book are emotional; at times, irreverent, and memorable throughout.

I recommend this to non-fiction lovers and fiction lovers, alike. Simply because the story told, the reality wrapped inside the world of music, should not be missed. Even the personal photos of the people and places at the center of Young’s life add to the fun.

Quill says: Whether heavy-metal head-banger, new wave/against the establishment screamer, or classic rock-n’-roller, this book is its own soulful experience that you’ll cherish.

For more information on Flatlander and the Rise and Fall of Mike & the Ravens, please visit the book's website at: flatlandervt.com