Five W’s of God: The Who, What, When, Where, and Why of God and His Plan for Creation 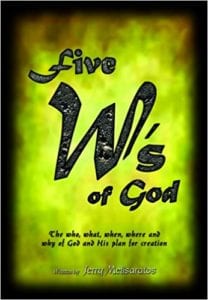 Five W’s of God: The Who, What, When, Where, and Why of God and His Plan for Creation

Unlike most current evangelical or Christian apologetic writing, Five W’s of God does not insult the intelligence or even common sense of the non-Christian or un-believing reader. Following in the footsteps of such writers as C.S. Lewis and G.K Chesterton, Jerry Melisaratos places the Bible’s account of the creation, God, Satan and the Divine’s plan for us and our world in a framework that does not contradict scientific knowledge or negate our most basic understanding of the universe. The writing is straightforward, consistent, and logical. Although Melisaratos tells us that he lacks “theological” credentials, this does not detract in any way from the directness or clarity of the book.

As should be the case when presenting what our modern world would consider controversial or sensitive subject mater, Melisaratos has done considerable homework. Although Five W’s of God is not a work of erudition, Melisaratos takes considerable pains to guide the reader to a deeper understanding of biblical meaning by uncovering the original Hebrew and Greek words behind later translations. Melisaratos clearly shows that with careful study and access to appropriate reference materials, the reader can gain an understanding of the Bible that is fully compatible with history and science.

Five W’s of God is a detailed map (for modern readers) of God’s process of creation, the source of evil, and the ultimate “re-creation” and perfection of God’s original designs. Like a well thought out debate, Five W’s of Godstarts with a summary, “The MasterPlan.” In this, Melisaratos details God’s original perfect design, the corruption by Satan’s misuse of free will, the battle and process of redemption for mankind, and ultimately the destruction of evil and the re-creation/perfection of both mankind and the universe. Melisaratos follows up this “opening argument” with chapters that delve into the nature, history and relevancy of God, Jesus, Satan and the timeline of existence. Of particular interest to readers will be the account of the various “ages” of heaven and earth.

Quill says: Five W’s of God flows easily and will bring deeper biblical understanding to the Christian reader and, potentially, faith to the un-believer.

For more information on Five W’s of God, please visit the author's website at: Five W's of God