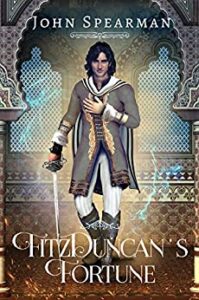 Casimir FitzDuncan is off on another exciting adventure, or more accurately, several adventures, in the newest book in the FitzDuncan series, FitzDuncan’s Fortune.

The newest book in the FitzDuncan series opens with Casimir FitzDuncan (Caz to those who know him well) meeting with his friend Sir Oliver. Ollie is explaining how FitzDuncan’s stepmother hired Aloysius Fenwick, a paid assassin to kill him. Fortunately for FitzDuncan, his stepmother ran out of money and so Fenwick never followed through with the deed (and for those who haven’t read the earlier books, it catches them up on some of the previous action). Now, Ollie explains, the king has hired Fenwick because, well, shouldn’t every kingdom have a hired assassin?

As the story continues, we are re-introduced to Lucy, FitzDuncan’s betrothed, and learn a little about her magical abilities. Other returning characters Freddy, King Mark, Queen Liliana, and a few others, make quick appearances before the meat of the story gets introduced.

FitzDuncan’s first order of business is to help a man, Thomas Gibson, with his inheritance. FitzDuncan had briefly met Tom during a duel and while he didn’t have much time to form an opinion, FitzDuncan felt Tom was honorable. Tom explains that before his father passed away, he left most of his estate to Tom, with control of the estate going to his stepmother until he reached the age of thirty-five. That was fine since Tom’s stepmother was a kind and caring woman. Unfortunately, there’s an unscrupulous uncle who wants to get his hands on Tom’s inheritance. FitzDuncan likes to help people and happily takes the case. He thinks it’ll be an easy fix, even with the uncle’s blackmailing scheme, but when FitzDuncan learns of a crocked judge who will be deciding the case, things get messy.

The inheritance case isn’t all that FitzDuncan has to deal with. Indeed, it’s just the beginning of a very action-packed novel. When the king calls on FitzDuncan, our hero is disappointed to learn that he must accompany Fenwick (yes, that Fenwick, the assassin who was going to kill him) on a long journey to assassinate the sub-vizier of Alygien who has angered the king. FitzDuncan has to assume the role of an obnoxious, irritating noble while Fenwick will play the role of the servant, in order to get close to the sub-vizier. The question is, will the two travelers make it to Alygien before they try to kill each other?

Still, there’s more action in store for readers. Pirates, magic, sword fights and roaming bands of nomads are just some of the things that await FitzDuncan and his fans. And we mustn’t forget the impending wedding between FitzDuncan and his ever patient and beautiful Lucy. Will he even make it back in time from his travels before the scheduled wedding?

It can be hard to jump into any series “mid-stream,” but for this series, the author did a good job of getting new readers up to speed without spending too much time slowing the story down for die-hard fans. FitzDuncan is a very likeable protagonist and it was easy to dive into his story and get lost in his adventures. Told in the first person by FitzDuncan, the story flowed well and the dialogue was believable and the characters enjoyable, whether “good” or “bad.” Fenwick was definitely a favorite, and the interactions between him and FitzDuncan, when they were undercover, were some of the best, and funniest scenes. FitzDuncan overplayed his obnoxious noble role to perfection and their interactions with the sub-vizier were quite enjoyable. The fantasy touches, with magical elements, were interesting and intriguing but not overpowering to the story. The story ends with a cliff-hanger and readers will undoubtedly be anxious for the author to get busy writing and furthering FitzDuncan’s adventures.

Quill says: Whether you start with book 1 or book 4 in the FitzDuncan fantasy series, you won’t want to miss any of the action.