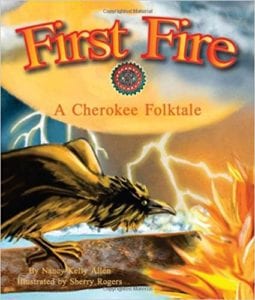 The stories of how things came to be began to flow out into the air under the nighttime skies. The stars twinkled as the children listened to their father’s tales of when the “world was new” and there was no fire to be had. The spider, snake, and birds looked over the water as “the Thunders hurled a lightning bolt.” The skies lit up with a dazzling display and a sycamore tree soon lit up in flames. It was very cold and the animals needed that fire spreading through the sycamore’s branches, but how could they get it? The “council of animals” met and decided that they did indeed need that fire and someone had to go get it.

The raven volunteered and quickly spread his white wings and flew toward the flames. Raven leaned forward peering into the flames trying to figure out how to return with the fire. Instead “the heat scorched Raven’s feathers black.” Legend says that is why the raven’s feathers are black. “I’ll get the fire,” shouted Screech Owl. Off he went to the burning branches of the sycamore tree. A sudden flash of flames quickly burned Owl’s eyes. Legend says that is why “Screech Owl’s eyes shine red in the bright light.” Neither Raven nor Screech Owl were able to bring back the fire, but could one of the other animals do it?

This is a fascinating, fun look at a Cherokee legend that explains how we got fire. The Cherokee storyteller in this tale is relaying to his own children things he heard from his elders. We learn how Raven, Screech Owl, Hoot Owl, Horned Owl, Racer (a racer snake), and Spider attempt to capture the fire and light from the sycamore’s branches and return with it. We then learn how each animal was changed by his attempt. The tale will be quite memorable as children will not only learn about legends, but also how they are passed on from generation to generation. The artwork lights up the pages with excitement and brings the tale to life. Newly independent readers can tackle this beginning nonfiction book with a bit of assistance with words such as “sycamore.” There are four pages of activities in the back of the book. Additional complementary activities can be accessed on the publisher’s website.

Quill says: If you are interested in Native American culture, you'll love to learn about these Cherokee legends!