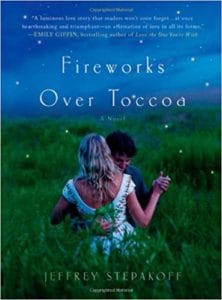 Can you fall in love with somebody who you have only known for a day? That is the question author Jeffrey Stepakoff asks in his debut novel Fireworks over Toccoa.

The story takes place during WWII, where Lily Davis Woodward, a young bride, awaits the return of her husband Paul. Married too young, the couple only had two weeks together before Paul was shipped off to Europe. Now, after living alone during Paul’s absence, Lily realizes she has changed and matured. Has Paul changed too? Will they be able to pick up where they left off?

Lily, her family, friends, and the whole town of Toccoa, Georgia, prepare to welcome home their GIs, including Paul. To celebrate the return of the town’s soldiers, a fireworks expert, Jake Russo, a handsome, dark-haired Italian, is hired to put together a fireworks show.

Driving home one day, Lily overhears a loud explosion coming from Jake’s practice fireworks. She stops the car, and without realizing that she’s walking right into the area where the sparks from the fireworks will land, she strolls out to watch. When Jake sees an attractive woman walk into the area, he dashes away from his post and pulls Lily to the ground to protect her from the falling embers. After Lily gets over her initial shock, she strikes up a conversation with the young man. At first they make small talk about the fireworks, but soon the pair is talking about the beauty of Toccoa, followed by more personal topics. It isn’t long before both realize they are falling in love.

The body of Fireworks over Toccoa takes place within a few days time. Lily is torn between her duty to Paul and her love of Jake. Is Jake her soul mate? Should Lily run away to Brazil with Jake or wait dutifully for her husband’s return? While the book got off to a slow and somewhat confusing start – it begins in 2007 with two boys discovering something (the reader isn’t told what) buried in the mud. Next we meet Colleen, a young woman preparing to marry, and finally the reader is introduced to Colleen’s grandmother, Lily. When Lily takes Colleen to the local military museum to reclaim the object the boys found, she begins to tell the tale of her youth. Once Lily’s narration began, the pace picks up and everything falls into place.

Fireworks over Toccoa drew me in as soon as Lily began to tell her story. The writing brought the town of Toccoa, the people, and the dry, hot, southern summer to life. The relationship between Lily and Jake is developed in record speed, but their conversations were believable and I never doubted that their love was real. As they shared their deepest secrets, their attraction, and passion grew. How could Lily fall in love with Jake when her husband was, at that very moment, on his way home? Lily’s dilemma, and what she will do, will keep pages turning until the very end.