Finding Rosa: A Mother with Alzheimer’s, a Daughter in Search of the Past 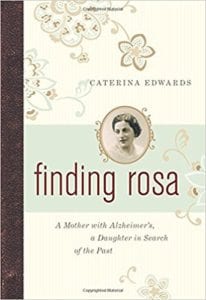 Finding Rosa: A Mother with Alzheimer's, a Daughter in Search of the Past

Giogia, a young Italian-Istrian, landed herself a good job in the Palazzo del municipo or city hall. Recording statistical information of births and deaths in Koper, the kind that genealogists treasure and pore over, was one of her tasks. People were accustomed to change and in 1948 change was still in the air, but "one morning she walked into the record office, and 150 years of books (at least twenty volumes) were gone." (p. 269) She became anxious and afraid, knowing that history was being erased. Caterina Edwards had listened to Giogia's story and many others as she searched for her own Italian-Istrian heritage. Caterina searched through the mind of her mother Rosa too, a mind that was fraught with Alzheimer's, a mind that was being erased just as the records of Koper and memories of the land of Istria were being erased from the hearts and minds of its descendants.

Can such memories be eradicated with the exodus of a people? Would Caterina be able to find the past through the faulty memories of a mother who was drifting away from her by the day? Hurricane Rosa, as her mother had been dubbed, was a whirlwind whose criticism frequently came down on her head and those of her father, her husband or children. The aura of denial hung in the air. Rosa had often been difficult, but her own husband, Frank, often covered for her, but when he died he left her to Caterina. Her world would soon be upended with the task of caring for someone whose mind became increasingly chaotic. Her mother Rosa's life was undocumented and the little she had relayed about her life was fragmented and, at times, almost mythical. Caterina felt a need to seek out her mother's past, the land of Istria, and discover a past that was so much a part of her, yet was lost in the pages of time. Istria, Istria, Istria ... they say that upwards of 350,000 ethnic Italians had joined the exodus. Was it an ethnic cleansing? Where had they gone? Where was her mother going? Where would Caterina go?

This emotional historical overview of the Itrian exodus and the exodus of Rosa's mind totally mesmerized me. I had never heard of Istria and was amazed at the forced exodus of a people who had been exiled from their homeland. It was a people who had seemingly disappeared from the face of the earth and the tie in of Rosa, a woman whose mind and memories were disappearing became especially poignant as the tale emerged. I loved the balance of the book, the shift between discovery and the difficult loss Caterina faced as she was losing her mother to the unknown. I was not expecting to find the history of a lost people in this book as the title simply does not belie what is in its pages, but was not disappointed.

Quill says: Inside these pages you will find a mesmerizing historical tale looked at from several vantage points, but primarily from that of Caterina, a master storyteller who can bring a family legacy and the history of a lost country back to life.