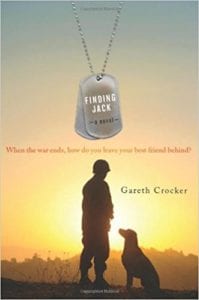 Death, destruction and one little ray of hope. These are not the usual topics of an uplifting story, but that’s just what Finding Jack is; an amazing story of hope, faith and love set against the horrors of the Vietnam War.

The year is 1972 and Fletcher Carson is a man lost in his own grief. His wife and young daughter died in a plane crash, leaving him alone and frightened. He tried to commit suicide but couldn’t even get that right. In a last ditch chance to end his life, he enlists and is shipped over to Vietnam.

Vietnam proves just as dangerous as Fletcher had heard and there’s a good chance that a man like him, a man with little desire to live and willing to take big risks, won’t last long. But then, while on a mission with his unit, he stumbles upon an injured yellow Labrador. The commanding officer orders the dog shot, as there is a chance the animal might be booby-trapped by the Vietcong. Fletcher refuses the direct order, an argument follows, shots are fired but in the end, the dog is brought back to base.

A portion of Finding Jack follows Fletcher and his Lab, now named “Jack,” through their days in Vietnam. It isn’t long before the men realize Jack is a highly trained military dog and the canine begins accompanying them on missions. The dog is able to sniff out the enemy, trip wires and just about any danger that might lurk ahead of his unit. He saves the lives of many soldiers, including the lieutenant who originally ordered him shot.

Returning from a mission one day, the men learn that a cease-fire had been declared. The war is over! But as the time nears to leave the hell of Vietnam behind, Fletcher learns that his beloved Jack will not be allowed to return. The U.S. government has declared all dogs “surplus military equipment” and ordered them left behind. As his anger at the government grows, so does Fletcher’s resolve not to abandon the dog who saved his life on numerous occasions. A plan it hatched to get the dog home to the States. Will the love and trust these two have for each other be enough to get them through the nightmare that awaits them on their travels?

I’m not one who typically enjoys war stories and thus was a little hesitant to read this one, but boy am I glad I did! The author, in his debut novel, did a fantastic job of creating a believable lost soul in the protagonist, Fletcher Carson. Without getting mushy or sappy, Fletcher was a man the reader could root for and hope that somehow he would find his way. The adoration Jack showed to Fletcher was so touching and again, the author didn’t go off and make it unbelievable like so many seem to do nowadays. There was no anthropomorphizing of the dog; he was simply a well-trained military dog who was devoted to his master. The author also carefully crafted dog behavior into his “Jack” as there was much in the story that made me smile at the typical Lab antics. The effect Jack had on the other men in the unit, too, was an important part of this book and shouldn’t be overlooked.

The idea for Finding Jack came one day when the author was at the Vietnam War Memorial in Washington, DC. While there, he met a vet who had placed a dog harness against the marble wall. The man explained the use of military dogs during the war, how there had been about 4,000 dogs in use, and how only about 200 made it home because the government decided it was too expensive to return them to the States. Thus, while Finding Jack is a work of fiction, it is based on real events and is a worthy tribute to those animals.

For those who are squeamish, it should be noted that there are numerous scenes of the violence that was a part of life in Vietnam during the war. The author does not gloss over the horrors of war but rather uses the events to show the desperation of the men and how much a simple thing as a dog entering their world could mean.

Quill says: An amazing story of love and devotion, set amidst the horrors of war. Do not miss this book!