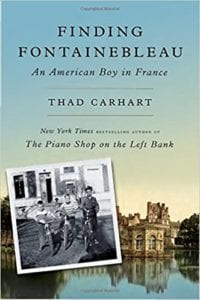 The harrowing transatlantic flight was memorable, but perhaps the realization that Thad had once walked among kings would not come to him for years. The family had flown to France during the fifties where his father would work at the Nato command headquarter. The Château de Fontainebleau would house his office, one that decades later Patrick Ponsot would show that boy turned man where his father once worked. The kings of France had many residences, but Fontainebleau would be their real home, a place where a young American boy would call home as well.

Château de Fontainebleau was “a supreme repository of French style, taste, art, and architecture” built in 1137. A four-year-old boy knew nothing of this, but only knew when he started school that his new name would be “Ted Cararr.” The pronunciation was beyond his teachers, his fellow students, but no matter, Ted would learn. His brothers Tom and Judd would have a more difficult time, but Ted Cararr was eager to learn. Yes, it was only when he became a man that he’d learn just how special “Phone-Ten-Blow” really was.

The family lived in the maison de maitre, the “master’s house,” where it was assumed that anyone could just stop in for a visit. It was a bit of a culture clash, but the family would survive when their mother put a halt to unwanted company. There were very unusual things such as the times Madame Duval had to undertake the “reading of the inventory.” Judd declared her to be a bit bonkers (“She’s crazy!), but customs were customs, odd as they were. Could one consider a stove an heirloom? Yes, in France they were.

“But how can we know the past,” Ponsot posed to Thad, “if we don’t save some of it?” Thad had saved those boyhood memories, but Ponsot was heading up the restoration of the Château de Fontainebleau for France, for the world. That American boy in France had grown up and brought his own family there to capture yet another generation of memories. But then there were those kings, the land, and even Marie Antoinette. Château de Fontainebleau was a magical place for a boy, a magical one for the royalty, a place “imbued with the history of France.”

I was expecting a simple memoir of a boyhood in France, but was quite surprised to find so much French history. If you don’t care for history (I do and loved it) simply take a pass. When reading this history, it very much reminded me of travel writers and how they could bring a place alive. Carhart could certainly join their ranks as he brought the Château de Fontainebleau and France alive. There were certain vignettes, such as a brief trip to Normandy that did so as well. He even off-handedly described the smells of Paris from the flowering blossoms to the grunge of the coal-fired furnace. If you love French history, you’ll certainly love the trip down memory lane, hundred of years of it.

Quill says: If you love French history, you'll love traveling with a young American boy through the decades of history of the Château de Fontainebleau!