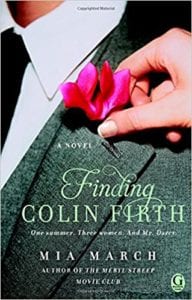 Colin Firth...Mr. Darcy...what more is there to say if you’re a female? (Long pause so you may capture the swoon-worthy image in your mind...) Colin may not have a large part in this novel, but he’s that pedestal that women seem to seek no matter what age they are.

Bea Crane is handed a letter one year after her mother has passed that tells her she’s adopted. Wham-o! Nothing like finding out news like that when you’re all grown up working at Boston’s Crazy Burger. Emotional turmoil sets in, but Bea does find out the information she needs and heads to Maine to face the mother who gave her up many years ago.

Veronica Russo got pregnant too early in life and the small Maine town she lived in STILL won’t let the past go. Even though she’s moved back to start over again, Veronica still has to hear whispers (just like every small town that is unable to let go of gossip to save their lives). Veronica is loved for her amazing elixir pies that have awesome names, like Amore, Hope, Spirit and even Cast-Off. These pies are ‘magical’ to some. While making/eating the pie all you have to do is think about what you desire, love, or don’t want anymore and your wishes can come true. (Much like the movie, Chocolat. Ah, Johnny Depp - another long pause...) Moving on...

Gemma Hendricks seemingly has it all; a loving husband who wants nothing more than to move to the burbs to be near his mother so Gemma can live the stay-at-home mom, 2 kids, 2 cars in the garage, white picket fence, American family life. Trouble is, Gemma is a reporter and doesn’t want that life. She gets so angry about her husband’s constant whining that she heads up to Maine to visit a friend of hers. Of course, it’s not just the whining, she’s also pregnant and has no idea what to do next.

In this small town of Boothbay Harbor Gemma finds a new outlook on life by working on a news story about the girls staying at Hope House, a home for pregnant teens. Bea and Veronica meet and have to deal with questions from the past. And a fantastic cop named Nick is in the mix who may just be the ‘catch’ that Veronica can nab with one of her Amore pies.

Colin Firth is coming to film a movie in Boothbay, so the people are all a-buzz about his visit. But these three women hold your heart during this tale with so much wit, humor and intelligence that Colin is never really thought about (well...barely thought about. Okay, I’m lying.)

I do have a negative. There are no recipes. I want those elixir pies and I expect this author to send me the formulas ASAP! (Or just send me Colin Firth and we’ll call it even).