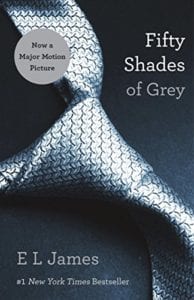 There are books that receive a great deal of ‘hype’ for whatever reason; you rush to the bookstore, read voraciously, and about halfway through (sometimes sooner) you realize it was just all ‘hype.’ This is not that type of book, BUT it is a book where the ‘hype’ was wrong. In fact, reviewers, sites, everyone has ‘hyped’ this book - BUT for the wrong reason.

Fifty Shades of Grey is the story of a girl fresh out of college who - because of doing a favor for her best friend - ends up interviewing a man by the name of Christian Grey for an article. She is beyond attracted to Grey, which is no shock. As always, once again, we have an ‘Edward’ look-a-like (seriously everybody, can’t we have just one ‘hot’ guy in a book that resembles…I don’t know…the teacher from Glee?). Anyway, Grey does have fangs but not the kind that vamps have. In fact, thankfully, there is nothing paranormal in this book at all. Grey is definitely fifty shades. One minute, he’s a fun, young guy who just wants to be that ‘dude’ having fun with his girlfriend and enjoying life. The next minute he is the businessman extraordinaire who, basically, owns Seattle - he’s that rich. The next moment he is cold, calculating, a real-live jerk who you want to punch square in the face. The type of guy you walk away from at a bar rolling your eyes. Then, out of nowhere, he becomes a Dominant looking for a Submissive to play his little ‘games’ in what he calls his Red Room of Pain located in his deluxe, extravagant world. Is he disgusting? Depends on your point of view. He doesn’t harm children or do anything icky like that; he basically just wants to find a woman who will concede to his rules, and he will give them the life they never dreamed of having. What he doesn’t expect is Anastasia.

Ana is new at the whole relationship thing, and definitely new at the ‘bedroom’ thing. She surprises Mr. Grey left and right - and even has the skills to play her own cat-and-mouse games of the mind. He never knows what she’s thinking. Ana can conform, but in seconds she can roll her eyes, laugh at him and, get him laughing. He begins to enjoy her sense of humor, her innocence, yet smart wit, and begins to really want this woman to be his in more ways than one. However, Grey has some deep, dark things in his past that he refuses to reveal, and when the subject of love comes up, he (as with most men) becomes as frightened of Ana as she is of him when it comes to his more rambunctious ways.

There is a romance tied up in all this ridiculousness. In fact, the book is extremely good and well-written, BUT the really good parts of this book are the conversations between our two characters and the unveiling of a man who was brought up in a world that Ana will never understand. He can show her things, but she can show him that he still has a heart…perhaps.

There are two more books to be read in this trilogy, and the most difficult decision readers will have is not whether they thought the eroticism was difficult to handle, but whether or not they care enough about Grey at the end of Book One to really give a darn what he does in the next two. This is a definite novel that all lies, “in the eye of the beholder.” Some will hate, some will love, some will become enchanted by Grey…it just depends on what type of romance you’re looking for.