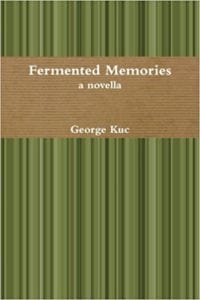 “Jack loved wine. It was his raison d’être.” (pg. 5). So begins the story of Fermented Memories, a novella about a man enslaved by alcohol. Jack isn’t an alcoholic, or at least that’s what he tells himself. But those around him know otherwise and they want to stop the man from destroying himself.

Jack worked as a substitute teacher, had creditors calling almost daily, and seemed to have little ambition in life. He enjoyed heading out to the woods with his binoculars and watching the birds but when his drunken stupors startled all the birds, the other birders asked him to leave. So instead, Jack turned his attention to his other favorite pastime; touring wineries with a drinking buddy. Still, Jack insisted he didn’t have a drinking problem.

While Jack struggled with his inner demons, he was blessed with a supportive group of family and friends. His mother, sister, best friend Julie, his lunch buddy Craig and Adrian, an employee in Jack’s favorite wine store, tried to help. But Jack wouldn’t listen. When Jack met, and fell in love with, Marci, his closest friends tried to convince him to stop seeing the attractive young lady. Marci, unfortunately, shared Jack’s love of liquor and the two often went on drinking binges together. Julie, Jack’s best friend, repeatedly tried to get him to see how his self-destructive behavior was hurting him, as she pleaded with him to return to group therapy with her. Jack was vague in his promises to Julie and nothing happened until one day, when Marci suddenly saw the light and realized that she and Jack had a serious problem. She convinced Jack that it was time to give up the bottle. But going cold turkey is extremely difficult. Would the two lovers be able to give up their love of alcohol?

Fermented Memories gives a very realistic view of life as an alcoholic. When Jack finally agreed to stop drinking, for a page or two of text, it seemed like he would be successful. I thought, “but it’s not that easy,” and indeed, the author was way ahead of me. Jack falters, gives in to his cravings, and struggles daily with his alcoholism. It isn’t easy and for anybody who has been in Jack’s situation, he/she will likely relate to many, if not all, of the pitfalls that Jack encounters.

The author did an excellent job of creating relatable, albeit perhaps a bit annoying, characters. I found myself wanting to scream at Jack, “wake up, you fool!” when he denied his drinking again and again. When pretty Nikki arrived (you’ll have to read the book to see who Nikki is – no spoilers here), I was wondering if Jack would ever wake up from his stupor. When reading this novella, you too will likely cheer on Jack’s support group and sneer at his enablers.

While Fermented Memories offers a compelling view of the world of an alcoholic, it should be noted that there are quite a few typos and grammatical problems within its pages, “Jack told Julie how long he and Marci been sober and all what they have been doing.” (pg. 53) A careful editing of the text would greatly enhance the readability of the story.

Quill says: Fermented Memories is a realistic portrayal of an alcoholic who fights every day to get better.

To learn more about Fermented Memories, please visit the author's website at: Lulu.com/georgesbooks