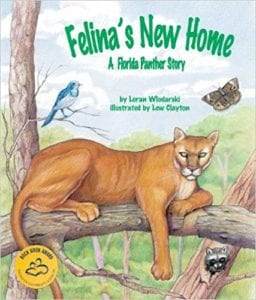 Young Felina, the Florida panther, “…was growing, but it seemed her forest was shrinking!” What would the panther do? Young readers will learn about Felina’s plight in the new book, Felina’s New Home.

Felina has grown up in a home that has been invaded by humans. Everywhere she goes, she finds humans or destructive signs that they have been around. From chopped down trees, to a new road and garbage littered along the bay, people have made a mess of Felina’s habitat. As the young panther discovers each new transgression, a different animal tells the panther how they have been affected by the destruction.

Eventually, Felina is tranquilized, brought to a reserve, rehabilitated, and then released into a new, safer environment. The story has a happy ending, “At long last Felina had found her home; and she was very, very happy.”

While Felina’s New Home presents a very important topic, the destruction of natural habitats, it tends to get a bit bogged down in its message. With the exception of the last few pages, it is a rather sad tale. For example, Felina cuts her paw on a soda can and then meets a crocodile who tells the panther, “The garbage people throw away can harm all types of animals, especially if they get tangled up in it...Plus, the fish I hunt can get sick when they live in polluted water. When I eat sick fish, I feel sick too. Now I don’t know what to do.” Despite these minor quibbles, the message is important, alerting children to the problems and measures they can take to help wild animals.

Felina’s New Home is nicely illustrated with colored pencils. The animals are quite realistic and children should enjoy all the lovely pictures of the panther and her woodland friends. At the back of the book are several instructional pages with facts about many endangered and threatened species.

Quill says: A beautiful panther teaches children about the plight of endangered animals within the pages of Felina's New Home.