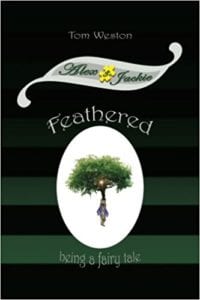 This is the third novel in the “Alex & Jackie Adventures,” and the one thing that all readers will agree upon is the fact that this series gets better and better with each and every book.

In this new tale, Alex and Jackie are heading to Dublin to stay with an Aunt and Uncle they’ve never met. Jackie, as always, is filled with spirit and can’t wait to learn all she can about Ireland. Not only that, but she would like a pint of Guinness to be waiting for them when they walk off the plane. Alex, on the other hand, just wants better reception for her cell phone so that she can text her friends back in San Diego. Alex is pure sarcasm (and completely hysterical); although she doesn’t mind ghosts and vampires, faeries are something she doesn’t quite believe in as much as her sister who’s absolutely bubbling over with excitement to immerse herself in Irish legend.

When they land, Jackie seems to hear an undercurrent of singing in the air, and when they arrive at the Gatehouse, which is the home/pub where their Aunt and Uncle and two cousins, Jeff and Mattie live, the girls discover a tree growing up out of the floor - a tree that, supposedly, calls out to the faery kingdom.

On one day of sightseeing, Jackie has a somewhat ‘strange’ moment when she kisses the famous Blarney Stone. Add to that a tour through a broken down castle and exploring the tunnels that reside underneath the pub, and Jackie is soon led by a ‘unicorn’ into another world. Waking up the next morning, she finds that her sister has turned into a pig.

Alex, however, finds herself waking in a pigsty on the grounds of an abbey back in the 1400’s. While she’s there, Vikings attack, and when she wakes up back in present day she has a legendary book in her hands - a book that comes across the news as having been stolen.

Going back and forth in time, Alex finds herself a Viking princess who’s scheduled to marry. While in the past she tries to save a monk, stop a war and return artifacts to their rightful owners. Jackie, on the other hand, heads to the faery kingdom trying desperately to save her sister and make a deal with the beings so that they can return home and leave behind the magical place forever.

Viking battles, legendary locations, Irish legend and history - this book has it all. Readers are not only granted a seriously cool story, but the historical information surrounding the tale is beyond exciting!

For more information on Feathered, please visit the author's website at: tom-weston.com