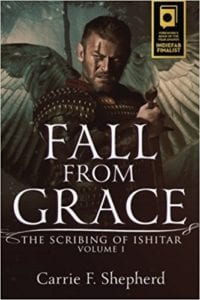 Upon opening this book readers will immediately see this as an amazing feat for an author to accomplish. This is a tale that offers a full-scale view of angels, demons, saints and more - and how each one’s personal work can bring about sacrifice, triumph and tragedy.

We begin with Marius Talbot, a banker who is about to meet with his number one client, Mr. Hamilton, and the man’s nephew, Mason. This day, Mr. Hamilton comes to place something into his private collection at the bank - a very old, strange looking puzzle box that has far more meaning than anyone knows.

Immediately readers are brought into Azrael’s world - the Archangel of Death - whose job it is to witness mortal issues and pass judgment. However, he has been punished because of sharing information in order to save someone who he cared very deeply for.

As a full quorum is introduced, the angels are all up above talking about what has happened since the Great War. Much like the Greek Council, there are a group of entities who work together to lead the humans down the right path. King Noliminan is Lord of all his sisters and brothers at this amazing forum, but is having a hard time with the anger that’s being batted about by his family. Everything from Free Will being a bad idea to the fact that some believe God loves his mortal children far more than His angel/demon children - almost every subject is a hot button topic for the Divine. In fact, they are getting madder by the minute and starting to choose sides once again against their brethren. There is only one - Ishitar - who was born of the Heavens AND the Hells. Only he can find a way to bridge the gap between the sisters and brothers and stop another war from taking place.

A potential Queen named Raziel is also there. Obsessed with power, this is the character who needs to play many sides and keep various entities angry as she writes her account of Lucius’s betrayal. Her game is the hardest, considering she wants the crown on her head and the power to rule over the Sixty Realms. Gabriel also plays a large part and familiar names such as Triton and his underwater battles between sea dragons and faeries join in the fight.

This book is filled with many figures and back stories from Christianity to Mount Olympus and Greek mythology, and the author has certainly made sure to give each and every character a true background as well as explaining in-depth to the reader the wants and needs of each one and how they’re going to achieve them. But the true ‘nuggets of gold’ in this particular title come from the explanations and understanding that’s discovered between souls who are complete opposites. In fact, when it comes to this tale it is hard to spot who is a friend and who is actually…the enemy. At times, this vast group of characters, and their myriad of stories, led to some confusion, so there are sections where you may need to slow down the pace of your reading to be sure you catch every little detail. Overall, however, this is a unique and enjoyable story of mortals, angels, demons and more.

Quill Says: Unlike so many books that have concentrated on this particular subject that all sound the same, Fall From Grace certainly delivers a new take on an epic tale of good versus evil.