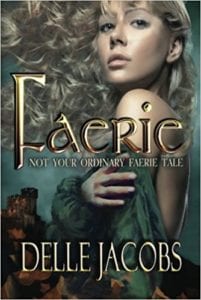 As the reader is drawn into this fantastically written romance from Delle Jacobs, the first thing to be seen is an old crone…making a deal with a King. From then on the mystery, adventure and supernatural thrills come one right after the other.

Leonie is a half/human, half/faerie who truly loves to walk in the woods and be a part of nature. She had a slightly hard ‘beginning’ when her mother simply disappeared into the woods one day – running from the people who wanted to hang her for being a witch. Leonie was taken in by a tremendously wonderful family and is trying to deal with the fact that she is very much like her mother; she has powers that must be hidden in order to remain safe and not be judged or threatened by the ‘people.’

Philippe le Peregrine is a Knight – the King’s favorite, in fact, who works extremely hard to serve his country. What he wants most of all is to be left alone. He wants no fiefdom, no wife, no anything – just the ability to deal with his hideous secret and live out the rest of his life as a virtual monk.

He remembers Leonie as a tall, gangly girl, but when he once again meets up with her (because he is assigned to serve and protect her world) he meets a true woman. She is beyond beautiful...a little too beyond, as if she is far different from all the other women on the planet. She has the strength and courage of the knights themselves, Leonie is also the best archer to be seen, and proves this by besting him in front of one and all.

However, when Leonie stumbles across some seriously strange happenings, she suddenly accuses Philippe of harming her…even though the image she remembers is not actually the truth. To save her maidenly virtue, the King forces Philippe to marry her. And even though they are both beyond upset about their circumstances, when the real danger of a sorcerer in their midst is revealed, they find out that they desperately need one another in order to survive the darkness that’s about to be unleashed.

It will not be a shock to any Delle Jacobs fan that this is yet another novel that will surely earn her more awards and accolades. Yes…it is that good. The stunning descriptions of the land, the forest - all the way to the wardrobe and diction – are dead on, making the relationship of the half/faerie and her struggling knight absolutely unforgettable!

Quill Says: Whether a fan of romance, adventure or fantasy, this is the book for you!