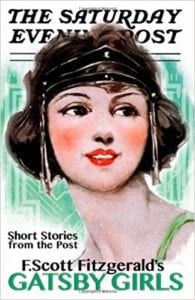 With all the hype surrounding the release of yet another Big Screen version of F. Scott Fitzgerald’s The Great Gatsby, it’s no surprise that other works of Fitzgerald’s are being re-released. As a fan of the author, this thrills me no end. So when Gatsby Girls came in for review, I grabbed it, hunkered down in my favorite over-sized chair, and started reading. What a delight!

Gatsby Girls features eight short stories that Fitzgerald wrote in the 1920s for the Saturday Evening Post. These were the first of 68 stories of Fitzgerald’s that the Post published, and they all feature strong, carefree women. These characters were the inspiration for the “Flapper” – the romantic version of the 20s girl who has been popularized through the years in both movies and books.

The first story, "Head and Shoulders" (my favorite of the group), introduces the reader to Horace Tarbox, an intellectual young man busy with his studies. He meets, and falls in love with, Marcia Meadow, a singer at the local theater. This appears to be a simple story of 'opposites attract' featuring the studious Horace, and the free-wheeling actress Marcia. She dubs them “Head and Shoulders” for the odd pairing of one with brains and one with “shoulders” (a dancer who swings her shoulders). But as the story progresses, an unexpected twist sees that fate reversed. Another favorite (although I enjoyed them all) was "The Ice Palace." In this tale, we meet Sally Carrol Happer, a young woman from Georgia. She’s bored with the quiet, dull life she has known and has decided to marry a northern man. When she travels north to meet his family, well, let’s just say winter is NOT the time for a Southern gal to travel north.

If you’re a fan of F. Scott Fitzgerald and have never read these stories – or even if you have – you’ll want to get a copy of this book. Along with the stories, the original illustrations from the Post are included as well as two appendixes, one that has reproduced all the stories as they first appeared in the Post, complete with ads, and again, with the illustrations. It’s worth the time just to enjoy the ads of the 1920s! The second appendix is of all the illustrations, enlarged a bit for easier viewing.

If you’ve never read any work of F. Scott Fitzgerald, what are you waiting for? The writing is exquisite, so descriptive and inviting. Impress your friends with knowledge of these stories - and I'm willing to bet you will discover a "new," favorite author too.

At the front of the book is a brief biography that Fitzgerald wrote about himself for a weekly feature in the Post. This is followed by a brief history of the author’s time at the Post, including his salary (he went from $400/story to $4000/story!), critics’ opinions of the stories and his friends' reactions, as well as a look at the popularity of his work. Before each story is a brief history of that tale, when it was published and a few other facts the reader will likely find interesting.

Quill says: Get ready for the “new” Great Gatsby by sinking into your favorite chair and getting lost in this “new” offering of short stories. They are a wonderful, enjoyable view into the world of 1920s Flappers and a country springing to life after a devastating war.