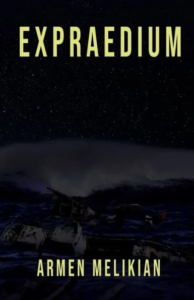 Expraedium is a book that compels the reader to slow down. Proceed intently. This book exists in a universe of its own conjuring. It’s crafty, challenges the inner sanctum of words and inspires poetic rumination that zaps the reader with cognitive dissonance. It’s about a martyr, Brathki, who goes through transubstantiation. He confronts fathers, brothers, mothers, lovers, institutions. Brathki endures the epic war between the Ubaratutu and the Urriantitii regimes.

Storyline is impossible to follow and this feels equal parts irritating and refreshing. This book is not for those who are comfortable with traditional narrative; instead, it’s for those who are longing for literary anarchy. It’s reminiscent of Finnegan’s Wake, of some things by Tom Robbins, and it laughs with the spirit of Haruki Murakami. It’s experimental and fueled by poetic dynamism. It’s hard-to-read literary geniuses speaking in whispers at a demolished jazz club. It’s language spews upside-down wavelengths.

Brathki is a petty bureaucrat, a philanderer, a martyr, a lover, and a brother who transmigrates to paradise. Brathki struggles under totalitarianism everywhere: Ubatatutu, the Holy HoshHosh trained Brathki to find criminals Johnnie Dog and Jerry Dog. How that storyline turns out? “Destiny: by the Ubaratutuc spit-roasted to be. Legs eight, sizzled.”

The original language and made-up words celebrate all things inaccessible; or else, it’s a trip into neurodivergence. Pure. Word. Wizzardry. Here readers find a frightening world built by distorted language. The Treasury Department of Ubaratutu and the Holy HoshHosh rule this world where Brathki grumbles, has lots of sex, and transubstantiates. He is a low-life good for nothing who goes through the ultimate spiritual conversion, and this drives leaders insane. Or not; who can tell? If a reader wonders what words mean, then maybe they overlooked the sound of these words? This book is a sound bath, a sonorous delight and frustration. The story line while invisible also feels deliberate. What I could gather is that Brathki is a complicated character trapped in a world of constraints. Orc Orc...is one setting, an urban center with a steamy red-lantern district. Women in high heels conduct scientific experiments.

Here is an example of how the prose poetry reads; this paragraph is describing a love interest: “A blouse pink. Arms sculpted from shoulders to fingers. A face bronze. A sibyl sleep-lidded. Over shoulders bare, hair chestnut-gold pour, accentuating chin. Jeans hug waist naked, the sodalite blue on ass devouring.” One woman, Sasha, is a nuclear scientist and Olya is a biologist. These two brilliant, beautiful sisters are goddesses equated to Athena and Aphrodite.

Expraedium doesn’t obey grammar or spelling rules. It doesn’t follow conventions of narrative. Nor does it adhere to formal poetic techniques. It’s a book to read to accompany angst. Page after page of this kind of warped reading experience might give the mind the necessary jolt to help one think outside the box and be creative.

Under the main narrative about Brahkti, there are three other storylines to attempt to follow. One subplot is a divorce court hearing involving a husband and wife who were unfaithful to each other. It reveals sexual promiscuity is ubiquitous.

The best way to read this book, perhaps, is just to relish the language. There are numerous outrageous lines: “The Xristos legend of antiquity, rewoven onto a lunatic’s dick.” One takeaway is “Piss heartely in the cup of your repentance.”

Quill says: Expraedium is the world’s epic battles and characters throwing a wild party at the Tower of Babel. A reader can quietly delight in this rebellious reading experience.