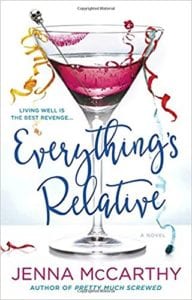 Jules, Brooke, and Alexis (Lexi) are sisters. Jules owns her role of oldest. She is responsible, dependable and always does the right thing. At the age of twelve, the rug of her near-perfect life she and her sisters lived was ripped out from underneath them when her dad dropped dead at a ball game. Before their dad died, their mom, Juliana, loved them. All that changed once he was gone. Mom was married to her job after that. She had three mouths to feed. Jules became the substitute mom for her younger sisters. Brooke, the middle sibling, was the quintessential pleaser: never make waves, listen to Jules and keep the peace no matter what. Lexi was the baby and she was off the rails. She was defiant as much as a deviant and the word ‘no’ was the equivalent of a joke when either sibling opted to use it on her.

It isn’t until the girls’ mother, Juliana, passes away a decade later, that the siblings are reunited. Did I mention once Jules graduated high school, she fled as quick as her feet would carry her long ago and far away? She was married to a great guy and supported him with both love and honor as he studied to become a lawyer. They owned a small home in the LA burbs and life did go on for Jules. Brookes was (sort of) getting on with her life as well. She was a preschool teacher and her toddlers adored her. Granted she was an amazing track star during her high school years, but it was the decade between then and now that every waking hour was devoted to consuming empty calories. At least she had something to show for it given the fact she had managed to pack on enough pounds to be considered obese. And then there was Lexi. She was the ‘bad girl’ poster child. She was getting along just fine among her posse of LA’s not-so-finest. When they are reunited in the attorney’s office and read the last will and testament of their departed mother, shock is one way to put their reaction once they learn they are about to become wealthy beyond their wildest dreams. However, before receiving their inheritance, they have the ensuing year to achieve specific goals mommy dearest detailed in the will before they can cash in on their respective fortunes.

Jenna McCarthy has put it all out on the pages of Everything’s Relative and succeeds in crushing the laugh factor as a result. It’s not often I pick a book up in the morning and wipe my calendar clean to finish the book in the same day because it’s simply too darn good to put down. Such is the case with this book. I am the third of three sisters and the wave upon wave of flat-out relativity to the dynamics and interactions of the three fictional sisters is uncanny. It made me think back to some of the shenanigans my sisters and I imposed upon each other growing up. A writer can’t learn that kind of writing in a workshop; it’s in her DNA! McCarthy treats her audience to rich, believable and down-right hilarious dialogue. There is not one iota of drag throughout this story. The sucker punch ending is brilliant and ties beautifully with the overarching plot. Bravo Ms. McCarthy! May I have another, please?

Quill says: Everything’s Relative is one of the funniest, laugh-out-loud reads I’ve had the pleasure of devouring in a long time—a must read!

To learn more about Everything's Relative, please visit the author's website at: www.jennamccarthy.com