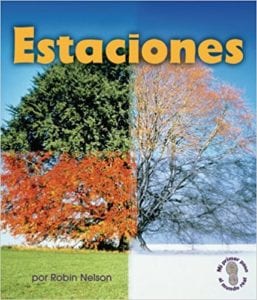 The little yellow flowers begin to push up through the ground past the snow when “el invierno se convierte en primavera.” After spring we can enjoy the summer, and after the summer the leaves begin to turn color and we have autumn. “Las estiones son un ciclo,” a cycle here on Earth. You can see on the diagram that the Earth or Tierra, is tilted at an angle. When it is cold, “la Tierra está inclinada lejos del sol.”

During the summer, or warm seasons, it is just the opposite because “la Tierra se inclina hacia el sol.” It’s fun to play on the beach during the summer months, but it’s also fun to play in the snow when it gets cold. Every season there is fun to be had. You can see a girl swinging on a rope, but she is still bundled up warmly. A boy is watching the lettuce begin to spread out its leaves while later in the year one lies on the ground as he’s warmed by the sun. “Cada otoño, el clima se vuelve más frío,” but there’s still time to have fun. What is your favorite season?

This is an excellent introduction to the estaciones, or seasons, for young students. Entirely written in Spanish, this beginning introductory nonfiction book about seasons is aimed toward the emergent reader to newly independent reader. There is a photograph on each page to illustrate the concept being discussed. For example, when we see a child smiling as she looks up to the sky as the snowflakes fall, we read “En invierno, la nieve puede cubrir el suelo.” Words that may be more difficult such as “inclinada” (slanted) are highlighted and defined in the glossary. In the back is an index, a glossary, a section that discusses more about Earth’s seasons, and additional facts.

Quill says: This book on estaciones, or seasons, is one in a series of six life cycle books (Descubriendo los ciclos de la naturalezea) that would make an excellent addition to homeschool, classroom or library shelves!