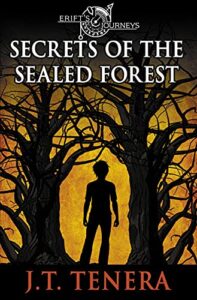 Erift’s Journeys: Secrets of the Sealed Forest follows the escapades of high schooler Joseph Erift and his best friend Eric Castis as they embark halfway around the world following the promise of an exclusive video game event. On the last day of school before summer vacation begins, Joseph returns home to discover a puzzling invitation waiting for him. In a plain brown envelope labeled with his name and address he finds a very odd letter. The letter explains that, due to his special skills and talents, he has been carefully selected to participate in a professional demonstration of a brand-new video game that is still one year from its release date. Also enclosed are two plane tickets to the Murean Islands—one for himself and the other for Eric—and a CD demo of the game to be reviewed. After some quick internet research to verify that the information is legitimate, Joseph runs to Eric’s house to share the news. After some initial skepticism, Eric is on board, and they make plans to meet up later that night to ride their bikes to the airport.

The adventure that awaits them when they reach the Murean Islands is one that they never could have imagined. It is as if the video games that they love to play have come to life. Neither Joseph nor Eric ever thought magic actually existed. However, after witnessing ships that fly, magic spells that create fire, slow time, and heal others, and a rock giant welding an ax, they find themselves true believers in the existence of magic.

Tenera has achieved an entertaining read that combines fantasy, action, adventure, magic, and heroism. The young protagonists in this story will appeal to young adult readers in middle and high school. The subject itself, that of video games and anime, is one that young adult readers often clamor to read. By crafting his story around this topic, the author has achieved a must-read for this age group.

Tenera’s writing is simple and succinct, while still being expressive. Though the writing may be too juvenile for adult readers, it would be perfect for young readers from approximately ages 12 to 16. As the reader witnesses the growth and development of the main characters, the narrative that accompanies this is engaging, thought-provoking, and full of surprises. Some aspects of the story did not quite definitively conclude, instead being left open to be resolved in a potential future book in the series.

Quill says: Erift’s Journeys: Secrets of the Sealed Forest is a thrilling story of adventure that will allow you to travel to faraway supernatural places without ever leaving your home. With this tale of best friends Joseph and Eric, the author has achieved the beginning of an epic magical journey that is sure to both astound and delight its readers.

For more information on Erift's Journeys: Secrets of The Sealed Forest, please visit the book's website at: eriftsjourneys.com/