Emma’s Poem: The Voice of the Statue of Liberty 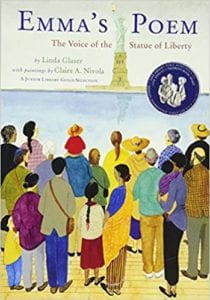 Emma's Poem: The Voice of the Statue of Liberty

Emma could count herself among the fortunate few. She was always dressed nicely and had a lot of food. Best of all she had "plenty of love from her family." They lived in a large beautiful home in New York City. Naturally, Emma thought that everyone lived liked they did. When she grew up, she became a "well-known writer," but she began to notice that not all people were as fortunate as she and her family had been. When she visited Ward's Island in New York Harbor she was greatly saddened by the poor, sick, and tired immigrant population she saw who came in search of a better life on the shores of the United States.

Many, like Emma, were Jewish and had escaped the madness of Eastern Europe. They were intelligent, but came with nothing. Many came without their "friends and relatives who had been killed." It was during the 1880s that she began to work with them. She helped them learn English, find work and in return she found friends. People looked down their noses on this type of practice and even more so on the people she helped. One day Emma "heard about a statue being constructed in France as a gift of friendship for the United States." In an effort to raise money, famous writers were asked to write something in commemoration. Emma had an idea.

This is a stunning portrait of a woman, a people, and time so very important in American history. Of course, Emma is the one who penned the poem that reads in part, "Give me your tired, your poor, Your huddled masses... " Undoubtedly few people know about Emma Lazarus, a woman all but forgotten by history, but her famous poem still blazes strong. The art work was strong, bold, and depicted those huddled masses perfectly. In the back of the book is a photograph of Emma, an interesting biographical vignette by the author, and the poem in its entirety.

Quill says: This is a wonderful historical book that deserves a place on your classroom, library, or homeschool shelves!