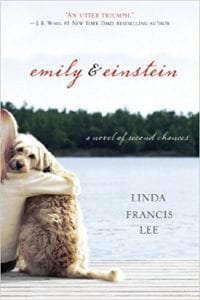 In New York City, under a gunmetal gray sky, Sandy Portman walks into his office, takes his messages from his secretary and, unfortunately, doesn’t check his voicemail or even take a gander at the message from his wife. Sandy is part of one of the ‘old-money’ New York families - a historic group who’ve owned the investment firm of Regal Bay for years. Sandy has always had everything he’s ever wanted and if he didn’t have it, he found a way to get it. One of those ‘things gotten’ was his wife, Emily. But now, on this night, he is headed to pick up his wife and ask her for a divorce.

Emily is a fantastic lady who is an editor at a publishing house and volunteers her time at the Upper West Side Animal Clinic. As she sits inside on this snowy, frightful evening, Emily feels empowered. Her life is an absolute joy and she’s surrounded with a husband who loves her - even though their marriage is, at times, a bit strained. She also lives in the fabulous historic Dakota building in Manhattan, and she has just completed a painting project that gives the place an even more stunning beauty than it had before. She’s waiting on her husband to arrive, hoping that Sandy received her message that stated she wouldn’t be volunteering tonight at the clinic so he could just head home.

But Sandy is out there on that snowy street. The night is god-awful, and he wonders why this strange, wiry-haired little dog is running in the road. When a car accident happens, Sandy is absolutely horrified - especially as he stands above his own body watching himself die. When a little man with white hair appears beside Sandy and tells him he can continue to live - but there’s one very big catch - Sandy jumps at it, only to find himself in a very strange body, with a very strange mission.

Emily is beside herself. The accident has taken away her love. Her regal stepmother is evicting her from the great, old building, and her boss is taking her ideas and passing them off as her own. Not to mention, the publishing company has been sold and Emily has to scramble to find her way through a treacherous, back-stabbing world.

This incredible book is told by two very different points of view - a dog who wants nothing more than to ‘speak’ with his master; and, a woman who looks back over the past as secrets begin to unfold that reveal the fact that her life was a total lie.

The little dog named Einstein who, for some reason, Emily takes home with her after the tragic events of that snowy night, becomes her friend, confidant, protector, and a little beast at times. Add in a new love, a sister who is as ‘off-her-rocker’ as she can get, and a memoir of a mom who was an outspoken feminist who didn’t believe in the power of men, and this book becomes one of the best of 2011.

It is no surprise that this incredible, entertaining, heartfelt, charming, and slightly supernatural book comes from the ‘pen’ of Linda Francis Lee. This author has, again and again, proven herself to be a fantastic storyteller who creates tales that will stick in the minds of readers and fans for generations to come.