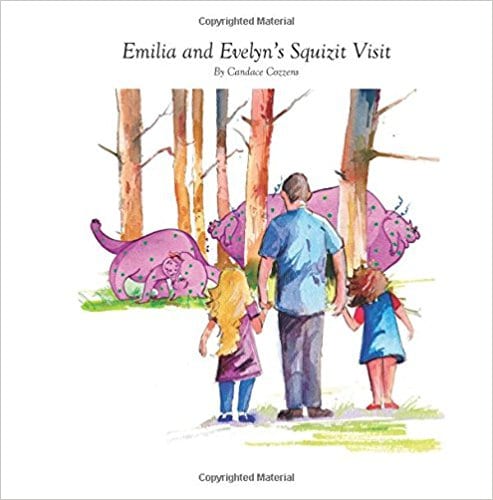 An afternoon of playing in the yard turns into a very memorable experience for two young girls when an odd little creature shows up to share their play day.

Emilia and Evelyn were having a great day in their yard. Emilia was pushing her sister on their swing and they were both having loads of fun. Dad, meanwhile, was doing something on his phone - talking maybe - but he really wasn't paying attention to his girls. All was peaceful until...

"All of a sudden from out of the woods, a creature appeared.
It was egg shaped and purple with green spots! It was really weird!"

A meatball shaped nose, three legs, two arms, one red eye and one green...this was definitely an odd looking creature. And it was probably one of the only things that could make Dad put his phone down and pay attention to what was going on around him! Emilia and Evelyn didn't know what to call the creature until a strange sound escaped from his mouth - "squizit" - and Dad declared that this was "...a Squizit visit!"

It soon became apparent that the Squizit wasn't there to cause harm but rather have fun. And how does a Squizit have fun? By stealing Evelyn's ball and then by jumping - splat! - right into the nicely raked pile of leaves that Dad just raked up earlier in the day. Dad realized that the Squizit was going to make a mess of the whole yard and it was time for the creature to go!

"At this point their Father started to chase the bothersome beast;
But it was too quick for Dad, who tried his best to say the least!"

Would the Squizit ever head back to the woods? The girls wanted to keep the silly creature but their dad knew better and wanted it to go away. But how?

Emilia and Evelyn's Squizit Visit is a sweet and goofy story told in rhyme. We never learn exactly what the Squizit is, or why it came to visit, but that's not the purpose of the story. Rather, this is a slightly non-sensical story meant to make children laugh and giggle and it certainly will. It is a relatively short story - two lines per two-page spread - so that it can easily be read to children ages three and up. The illustrations add to the light-hearted tone of the book with the expressions of the Squizit, which run the gamut from happy to goofy, as the highlight of these pictures. Overall, a nicely told tale that children will certainly enjoy.

Quill says: A fun and silly little story that just might become a bedtime favorite.