Embracing the Wild in Your Dog: An Understanding of the Authors of Your Dog’s Behavior – Nature and the Wolf 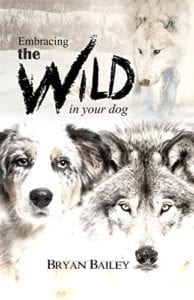 Embracing the Wild in Your Dog: An Understanding of the Authors of Your Dog's Behavior - Nature and the Wolf

Just what makes this guy tick? No, I’m not thinking about Bryan Bailey because I now know that the call of the wild makes him tick, makes his heart beat just that much faster. Since Storm came to live with us, I’ve been much more interested in what he’s all about. I’ve seen and heard some very disturbing things lately, including the fact that a woman was mauled within an inch of her life (literally) by a couple of dogs just up the street. The dogs remain comfortably behind closed doors and for some time there was a community in turmoil. It still is, but more of the discussion is about poop, wayward dogs, uncontrollable ones, and just plain old dog talk.

The tale begins, and it does read like a tale, when we find Bailey learning about the wilds of Alaska. His seemingly merciless mentor began to teach a young boy how to face his world and survive. It’s a tale so masterfully woven into the threads of this book I didn’t want it to end, but to go on for a few more pages. It’s obviously the background material that gave me great insight into what the man was all about. Not unlike his mentor, words aren’t minced. Those dogs aren’t pets, but rather “we own make-believe humans in fur coats, and we treat them as such.” No, Bailey obviously isn’t one who’s even going to care one whit what anyone says about him.

I read a little more and the book quickly came alive for me when Bailey was confronted by an Indian. It all came about when that Alaskan Indian perceived he just couldn’t handle his lead dog, Ranger. The race would be on, but could he win? “He’s no dog,” the man stated. “He’s a wolf. Treat him like one, and he will run faster and with more spirit.” Bailey now was faced with discovering just what that Indian meant. My curiosity piqued, my race was on to delve into pages trying to find out what I probably instinctively knew. I wanted to learn about that wolf in my dog and how to work with it to my advantage.

And then the man pounds us with his beliefs, all relative to the fact that he truly believes there’s plenty of wolf in our dogs. Ah, yes, and then there’s that line that’s going to be a big turnoff for some: “if we tried putting our foot in our problematic dog’s butt every now and then...” Of course that’s not the beginning nor the end of Bailey’s controversial stance on much of anything dog-related. I learned what he thought of things like no-kill shelters, dog trainers (not much), dog aggression, survival of the fittest and where and how it got misplaced. One of my favorite lines is that “Obedience is required. That is the rule.” Well, that’s a couple of lines, but I’ve only got two words for those who want to know more about their dogs...read it.

Quill says: A controversial viewpoint for many, but a totally fascinating one all dog owners should read!