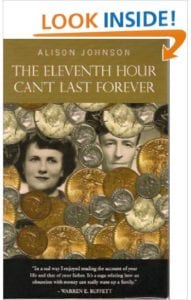 The prairies of Nebraska were dotted with small towns, town in which everyone knew one another. There were few secrets, but one day an astonishing secret would come to light that would not only raise eyebrows, but ultimately destroy a family. The Kotter family didn't appear to be unlike most families in Palisade, Nebraska, but Fred and Nellie's eldest son, Dean appeared to have some quirks that would become more exaggerated the older he grew. When he was a young man, he decided to court beautiful Audrey Musick, an intelligent woman who had come to the town to teach. The match appeared to be made in heaven, yet Audrey's family quickly began to have reservations. He asked a former girlfriend to pick out their wedding china and his social skills appeared to evaporate.

Dean's nose was better suited in between the pages of a magazine rather than focused on the needs of his family. Audrey was shocked when she awoke from the anesthesia after giving birth to her firstborn son, Kent, to find he wasn't even in the hospital. With the birth of three more children, Diane, Alison, and Mark, she would soon find herself trapped in a loveless marriage in a God forsaken podunk town in the middle of nowhere. Dean began to exhibit the insidious traits of a hoarder and began to accumulate gold and silver coins as he believed "that another depression was right around the corner." (pg. 13) A Financial Armageddon would soon be upon them and Dean Kotter, whose love for his family had no bounds, had to save them.

Grandmother Kotter "helped nurture the philosophy" with self-sacrifice so her sons could have more. Dean would follow suit, yet his obsession would ultimately prove destructive. He began to save, to hoard and nothing could stop him. No amount of persuasion would convince him to buy a larger home to house his growing family. Alison, desirous of a bit more privacy, set up her bed next to the coal furnace in the basement. His miserliness was boundless and, as Alison later claimed, "...all the while that Dad was collecting some 200,000 silver nickels, he would still make Mom walk five blocks just to save putting a nickel in a parking meter when they visited Lincoln or Denver." (pg. 27)

The seeds of madness had been sown. As adults Kent and Mark "shared many of his [Dean's] habits and personality and character traits." (pg. 73) Diane's "impractical nature" surfaced with a vengeance at times. Alison appeared to try to stand above the fray, yet her self-righteous bent quickly antagonized her siblings. Audrey Krotter, a woman who prided herself with her intelligence and affinity for all things of culture, began her sudden descent into madness. And then there was the treasure, a treasure that would ultimately push their avarice buttons. They began their mad scramble to find the gold and silver...two tons of it. Who would control the rights to this fortune? Why did they want the money from a man whom they clearly despised? How would they stop the whirligig of madness they were spiraling into? Did Dean's theory of a Financial Armageddon actually have some truth to it? Money, money, money...

This memoir of money, madness, and the destruction of a family was utterly mesmerizing. I haven't read a memoir so intensely riveting in quite some time. On one level, the author tries to remove herself and stand apart from the insanity, but clearly she was at ground zero throwing her best punches. For example, her sister Diane claimed, "I have very little love left for you, Alison, even if you are my sister." (pg. 103) This is obviously a defensive statement in response to antagonistic events that transpired between the sisters, not a statement that normally would come out of the blue.

I'm not one who particularly enjoys reading about the misery of others, but felt compelled to keep on turning the pages to see what possibly could transpire in the lives of this family who continually seemed to be spiraling out of control. There were a couple of sequences that were nonsensical. For example, one moment the family wanted Dean declared incompetent, but later were looking for a legal reversal so Alison could take over as conservatrix. (pg. 133) I found the epilogue to be overly long and somewhat self-serving, with Alison repeatedly trying to justify her actions. There are a full thirty pages of photographs and a few pages of reproduced ephemera. If you want to accompany a family who lived in the shadow of an Armageddon, this is one book that will blow your mind!

Quill says: If you want to read an astonishing story of what "real money" can do to a family, simply count on a few hours on a roller coaster with this amazing story!

To learn more about The Eleventh Hour Can't Last Forever, and to purchase the book directly from the author, please visit her website at: www.alisonjohnsonmemoir.com