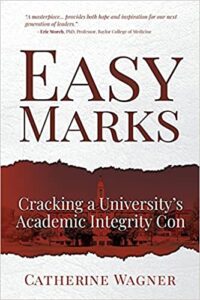 A college student with high grades and high hopes finds herself enmeshed in a perilous situation in the very system she so highly regarded and innocently trusted, in this potent account by Catherine Wagner.

Wagner was accepted at North Carolina State University, a time-honored institution, where she had a 4.0 grade average by the end of her freshman year in 2016. She was accepted to study in the Department of Chemical and Biomolecular Engineering, with the ultimate intention to study medicine. At the same time, she undertook a double major in Spanish and received much academic recognition. But her first class, Chemical Engineering 205, would prove her downfall.

Early in the 2016 academic year, after meeting with a fellow student to do homework, separately but in the same commons room, she was accused by her professor, Dr. Beisel, of cheating, because she and the other student had very similar answers to one question on the assignment. A year of legal struggles and personal agonies would follow. Her signature on a form entitled Report of Academic Integrity Violation in which she claimed that she was “not responsible” seemed to jeopardize, if not entirely crush, her ambitions for future education. The Director of Undergraduate Studies, Dr. Bullard, a dynamic woman and very powerful within the University structure, seemed convinced that Wagner had cheated. This designation was intolerable to the young woman, who enlisted the help of her parents, some legal personnel, and independent expertise located on the Internet, to prove her innocence. This book is the result, an almost hourly chronicle of her many encounters with Bullard and others, her determination to clear her name, and her uncovering of what she refers to as a con game perpetrated by Bullard and others, seeking to produce a certain number of cheating incidents to underpin their own academic research and credentials.

Wagner has collected hundreds of pages to establish her integrity and point out underhanded practices perpetrated by certain members of the University faculty. She has reported hearings word for word, interjecting her own vibrant opinions at various phases and referencing such historical events as the Salem Witch Trials by way of example of the perfidies she observed and diligently recorded in this highly complex, fact-weighted unmasking. She includes interesting, even at times amusing commentary, and in general, makes a strong case for her voice of vindication to be heard by all concerned. Through her persistent struggles and many dialogs with those in power, she was finally exonerated. But she still uses her strong voice on behalf of others: she insists that since students pay enormous sums to pursue higher education, they should not be manipulated and threatened as she was within the system. She makes a case for righting previous wrongs and establishing more scientifically based structures for determining allegations of cheating.

Quill Says: Catherine Wagner’s Easy Marks could be a life altering read for anyone caught in similar circumstances, and for that reason, her painstakingly careful approach to the potential academic and organizational minefield is admirable.