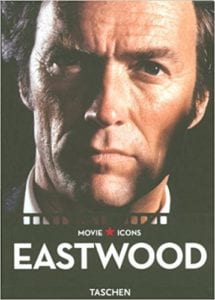 Clint Eastwood’s soft, almost beautiful face as a young actor belied the macho man who would one day snarl out, “Go ahead, make my day.” Even the most diehard fan would be amazed to know that he actually posed for “glamour-boy and beefcake shots” early on in his career. In the pages of this mesmerizing book, that beautiful, glamorous face quickly changed as he began to snarl through his early spaghetti westerns, Rawhide, and culminated in the grizzly faced, explosive characterization of the rogue cop. He adopted a demeanor that could chill anyone as he played the character Harry Callahan, yet he was a man of few words.

His unusual, somewhat silent approach to acting captivated his audience, one who “responded to the powerful mystique conveyed by Eastwood’s minimalist approach to character creation.” (pg. 11) Eastwood’s earliest films Francis in the Navy and Lady Godiva of Coventry seemed contrary to any roles this red-blooded-male would consider taking on. It wasn’t until 1955 that anything remotely resembling a weapon showed up in one of his films, but soon he was to get that lucky break and quickly became a phenomenally popular star in Rawhide as an “amiable, clean-cut cowboy on a cattle drive.”

Clint Eastwood quickly became the stuff of legend as his acting career took off. His physique made women swoon over him and most likely made many a man rush to order the Charles Atlas fitness course. His body was a fine-tuned weapon. He “would continue his physical fitness regime throughout his life.” (pg. 37) Later, in the mid-sixties when Rawhide’s popularity began to fade, Eastwood continued his quest for stardom through cowboy films, but occasionally branched off in lighter fare such as The Witches in 1965. Nothing could compete with his typecast role as a cowboy and indeed, films such as The Good, the Bad and the Ugly (1966) cemented his persona as the “Man with No Name.”

In the seventies, Eastwood, the perennial cowboy began to branch out. Characters the likes of Harry Callahan were born, he began making films with his future partner, Sondra Locke, and he even found a beer buddy named Clyde. Every Which Way but Loose (1978) was a phenomenal hit and undoubtedly paved the way for him to express himself in film any which way he chose during the next three decades. The mold of the tough guy was broken and Clint Eastwood became an American film icon.

In this dazzling series, Movie Icons, we first explore Clint Eastwood’s mythic machismo with a brief overview of his career. The visual filmography, with captions in English, French, and German, is filled with stunning art photography, both in black and white and full color. There is a wide array of movie stills, candid shots captured on movie sets, and portraits. A chronology, filmography, and bibliography nicely round out this visual feast. This book is an excellent tribute to a great American icon, a book that you’ll want to browse over and over again!

Quill says: Anyone who has ever seen Eastwood’s Man with No Name act, is undoubtedly going to want to browse this book. The “Man” is beautifully portrayed in this photobiography as he was...a legend and Hollywood icon.