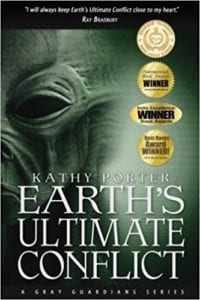 Earth's Ultimate Conflict is set in the near future. The setting should be familiar to a reader in the United States. The story could almost be happening right now, and if you read the book late at night, you might begin to worry that it is. There is a new president, however, also an increase in seismic activity, and an increase in the number of people reporting that they have seen UFOs. The story begins at the same time as an epidemic of severe allergies. Victims are suddenly unable to breathe and must be rushed to the hospital. The population begins to panic as the media report new cases of Severe Environmental Allergies daily.

Almost immediately we realize that the UFOs are real and that some of the main characters have been abducted. Author Kathy Porter follows a number of characters, including the President, through the dramatic early days when people start to get sick. The characters at first seem unrelated to each other, but we begin to see the connections between them, as Porter weaves them together into a story with several twists and turns.

Porter jumps right into the action, and does not take a lot of time to develop the characters. At first I had some trouble keeping them straight. Most of the characters are similar in that they have ordinary jobs and familiar concerns, such as family, friends, work, and health. Another thing the characters have in common is that they are believable. Porter's dialogue is natural, and the conversation reads like many I hear in my daily life.

Though I had some trouble in the beginning remembering which character was who, I began to appreciate their ordinariness. The terrifying things that happen-- the Severe Environmental Allergies, the abductions-- are happening to regular people. Instead of identifying with one particularly memorable character, I began to feel like part of the group of confused, frightened residents of Kathy Porter's Planet Earth.

Porter's characters are all frantic because they do not understand what is happening. Before they can help themselves, they must figure out what, exactly, the danger is. The more they search for answers, the more mysteries they turn up. I felt just as confused as the characters in the book and just as eager to find the answers. Once I was hooked, which happened almost right away, I had a hard time putting the book down. Porter keeps the reader confused almost to the point of frustration-- but not quite. She reveals small pieces of information which shed new light on the events that have gone before.

There were several times during the first half of the book when I thought I had figured out the big picture. Then would come an event that turned my assumptions upside down. For example, it's hard to decide whether the aliens are actually trying to help the humans and, if not, what they are trying to do. The reader only knows as much as ordinary people on Earth, and those people don't all agree.

The first half of the book was the most fun to read. Porter does a good job of keeping the reader curious and motivated to read on. She knows just when to reveal the next clue, which, by providing a little more information, makes the reader even more curious to find out the rest. Once the characters know what they are up against they have to, of course, save the planet. This last section was less engaging, but Porter does manage to tie up some loose ends and bring the book to a satisfying conclusion. She also leaves enough unresolved that readers will be looking for the sequel to Earth's Ultimate Conflict.

The book as a whole would be easier to read had it been edited more thoroughly. Problems with spelling, punctuation, and grammar are frequent enough to be distracting, and even confusing. For example, on page 369, “If we stop the Elders from any further experiments we can become, as least in our hearts, people we can become people to be proud of.”

Quill says: Earth's Ultimate Conflict is hard to put down, full of intrigue and plot twists.