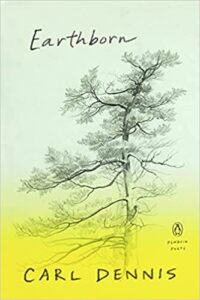 Pulitzer Prize Winner Carl Dennis ingeniously lays out his key themes in Earthborn, with his poems about the neglected Earth, and the human psyche born on it.

There are six sections to the collection, each consisting of a set of seven, eight, or nine poems, containing a scattered assortment of the poet's explorative and reflective thoughts laid out in distinctive themes.

In its six sections filled with divergent and forthright poetry, the book examines the immortality of the human race as opposed to nature, as presented in Bottle of Wine, as well as the desire for companionship by humans, often lonely due to declining years, inexperience, or his own arrogance. Additionally, there are some poems that dissect historical and biblical accounts to examine and comment on human indifference to nature. Another underlying theme throughout the book pertains to mankind's self-centeredness and insatiable thirst for knowledge in the wake of science, utterly indifferent to the Earth and the ramifications of climate change.

In terms of the delivery of the themes in Earthborn, all of them have been done very well, although I believe a more structured arrangement of poems, providing each theme with a distinct section, would be more effective. The poems focus on the "earthborn" and the thoughtful yet unconcluded answers to questions par human existence. There is a nudge, a prodding for readers to take action, whatever size their contribution may be, to make the Earth a better place to inhabit. It displays the incessant contemplation of the human race about life after death, which is once again cleverly portrayed in the context of history and biblical accounts. I am amazed at how coherent the poems are, in spite of each poem insisting on a few readings to elicit the poet's deepest reflections.

Quill says: In shedding a subtle yet effective light on human indifference to nature that is in sharp contrast to his fragile existence, Earthborn is a brilliant attempt to explore the transient human and his eternal aspects.