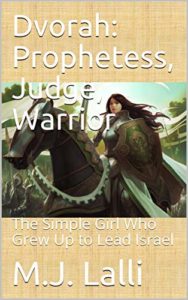 In her exploration of the dynamic accomplishments of Dvorah based on biblical text, novelist M. J. Lalli has created a vibrant tale of love, war and wisdom.

Dvorah (often seen as “Deborah”) is the daughter and only child of a strong, assertive mother, Ajalon, and a stalwart, visionary father, Eleazar. They reside in the Promised Land of Israel, in early times when Israelites and Canaanites were at odds. Both a precious and precocious child, Dvorah is trained in household arts as diverse as working with wool and making bricks. In her early teens her parents gift her with a mare, Zenja. As time goes by, Dvorah and Zenja will become mutually trusting companions.

When she is about 18 years of age, Dvorah hears the voice of God telling her that she is to act as a judge among the people, and though she is ready and willing, she must rely on God to show her what to do next. She is intuitively guided to station herself on a hill under a palm tree and use palm fronds as instruments in her work. She soon begins hearing cases, gaining respect and renown. A few years later, God tells Dvorah to contact her cousin Barak and inform him that he is to lead an army against the Canaanites; he agrees, while insisting that she accompany him. That struggle concludes with an Israeli victory at Mount Tabor, and Dvorah, hailed as both prophetess and warrior, returns home with the assumption that she will continue her life as a judge. But she will face yet another conflict as two determined men vie for her hand in marriage.

Lalli, who is a scientist by profession, has clearly done extensive research to underpin her well-organized vision of the life of Dvorah. The scenes ranging from home life to warfare have a ring of authenticity. Young Dvorah is sent to the fields to analyze the growth of flax needed for brick making, and measures time by the size of shadows passing over the house. A description of young Barak killing a lion with a slingshot makes us believe in that weapon’s power, and we will see it employed later as Barak strikes down a giant attacker to save a comrade. Lalli’s characters speak in simple, flowing dialog, neither archaic nor stilted. She reveals her knowledge of biblical lore in the many stories recounted, using some Hebrew words and phrases as needed. Most chapters conclude with footnotes containing biblical references, and within the narrative, Dvorah and others compose or quote from songs recounting great deeds and praising Israel’s God.

Quill says: Lalli’s strongly plotted saga of the deeds of a formidable female from Old Testament times will appeal to fans of historical fiction, as well as to those who enjoy romantic, heroic tales from any era.