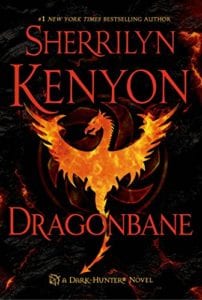 After a lifetime of hardship and betrayal, Maxis Drago has finally found a place of sanctuary in the city of New Orleans, something he never thought he would find. However, he was lucky to locate a group of people who understood his particular species as Maxis was no ordinary being, he was a dragon. In fact Maxis was not just any dragon but held the title of "Dragonbane," meaning he who protects some of the world’s most powerful objects. This mark, however, has also made him the target of many enemies who seek to take his life. The one thing Maxis values over his own life are the lives of his family, especially his brothers who have been through as many hard times as he has.

As if constantly fighting for his life was not enough, Maxis is suddenly confronted by his long lost wife, Seraphina, who he had thought he would never see again. She had betrayed his devotion one too many times in the past and he had written her off forever, never wishing to be in her presence again. Low and behold here she is storming back into his life and then giving the news that his family does not include just his brothers but that he has fathered a son and daughter as well. After the initial shock of this news wears off, Maxis is told that his children are in terrible danger as they have been captured by a menacing demon that wants to get his hands on a particular object that Maxis is in charge of protecting.

Now, the only thing on Maxis' mind is to find a way to save his children as his family always comes before everything else, but Maxis is still unsure if he can trust his wife who has held the truth from him in the past. However, if he is going to be able to save his son and daughter he may have to forget his past feelings and work together in order for them all to be safe.

There were so many elements that I found myself enjoying in the first couple of chapters of this book. One of the most prevalent elements being that the main character of Maxis is presented as a perfect steadfast, honest, and loyal hero who I could not help but fall in love with from the first page. For a story to really come alive I think it is imperative that the reader make a connection with the main character and feels as if they have someone to cheer on, to follow, and to succeed with. Author Sherrilyn Kenyon definitely did that with Maxis and in doing so I felt as if I was taking a journey with this character step-by-step with him and that made for a wonderful and exciting reading experience that had me wanting to read more at the end of every chapter.

Quill says: An absolutely wonderfully crafted fantasy that has me hoping for a sequel in the near future.