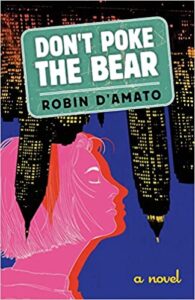 In the city that never sleeps, how does one overcome the challenges of a hand-to-mouth existence, difficult boyfriends, and a notorious housing market? We’ll find out as three friends, Allie, Natia, and Rihanna, navigate the brutal landscape of New York City in Don’t Poke The Bear by Robin D’Amato.

It was in the late 1980s when Allie, Natia, and Rihanna all found themselves moving to the middle of the bustling and ever-changing New York City. Eight years later, despite awful ninety-hour work week jobs with meager pay and a terrible real estate market, these three 30-something friends found the City to be bewitching enough to stay.

Eight years after moving into New York City, Allie, an overworked freelancer in her mid-30s, received a phone call from her boyfriend’s mother asking about the whereabouts of her son. Allie had been trying to contact her boyfriend for a couple of days already but she assumed that he had just been having fun elsewhere in the city. Several stressful days later, they found him dead in his apartment from a heroin overdose. After attending the funeral with her friends Natia and Rihanna, Allie eventually came to terms with her loss and acknowledged that she wasn’t deeply in love with him. Little did she know that her “thing with rabid dogs” was, in fact, a reality when she eventually met and fell madly in love with Pest, a divorced rock-and-roll musician with two kids.

In the meantime, Rihanna was living in her cheating boyfriend’s party boat in the Hudson River. She had caught him cheating on her a couple of times but she was in love and kept on accepting him back into her arms. Eventually, Rihanna found out that she had Hepatitis-C and, after a couple of laboratory tests and visits to the doctor, found herself $30,000 in debt.

On the other side of the city, Natia was living with her boyfriend, Danny, in a tiny cluttered apartment in a bad neighborhood. Danny was a recording engineer with social anxiety and, despite their money problems, getting a typical job was something he was incredibly reluctant to do. Their cramped apartment doubled as a home recording studio for Danny if and when he got clients. Meanwhile, Natia’s family was well-off and her mother initially wanted to send her to a pre-med school before Natia decided she wanted to make her own life. It didn't help that Natia’s mother looked down on Danny not because he was a person of color but because he did not have a profession that she respected.

Don’t Poke The Bear by Robin D’Amato is a contemporary fiction novel about the experiences of three women with different backgrounds and circumstances who all found themselves living in the unpredictable but equally charming New York City and dealing with all of the challenges that the City entailed. The story was well-crafted, with believable characters in daunting situations full of drama and heartbreak, with a soundtrack for every part. I felt like I was their friend, shaking my head and sighing in disappointment every time the ladies would make a questionable decision. I wanted to have a wine or two with them and help to unpack all of their emotional baggage. I wanted to warn them against staying with manipulative and toxic men and I wanted to tell them that real love shouldn’t make you suffer. This is a TV series in the making; a well-written story about realistic characters in equally realistic and daunting situations.

Quill says: This is a well-crafted story about three women and their experiences in navigating life and love in New York City.

For more information on Don't Poke the Bear, please visit the author's website at: robindamato.com