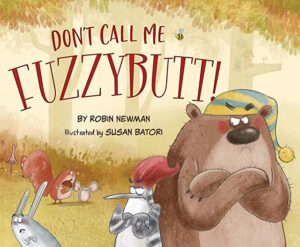 A bear's hibernation, and a woodpecker's need to peck wood, lead to an epic fight between woodland creatures that instead of escalating, ends in a delightful resolution among good friends.

Bear is getting ready for his annual ritual of hibernation. He tucks himself into bed with his teddy bear and falls asleep almost instantly. Unfortunately, Bear is a very light sleeper and almost any noise can wake him up. So he knits a sleeping cap and earmuffs and chops down several trees to make a good, solid front door. Now it should be quiet enough for him to sleep.

Nearby, Woodpecker is a master building of houses, from rustic ranches to solar-powered duplexes. To build his houses, Woodpecker has to peck holes in pine trees. But when Woodpecker notices that some of his houses have disappeared, he goes on a search to find out who, or what, was taking away his buildings.

When Woodpecker follows the trail of evidence right up to Bear's front door, he confronts his neighbor and asks about the missing houses. Bear doesn't appreciate being woken up from his deep sleep and calls Woodpecker a Featherbutt. Woodpecker's feeling are hurt but he doesn't back down and soon things escalate and the pretty bird calls Bear a Fuzzybutt. Eeek! Like Woodpecker, Bear's feelings are hurt. Will they be able to patch things up or will the name-calling continue?

Author Robin Newman has tackled an all-too-common issue that many kids are faced with on a daily basis. Name-calling can be hurtful and too often children who find themselves in such battles often don't know how to de-escalate. Through the eyes of Bear and Woodpecker, two cute animals who truly mean no harm to each other, readers will see that feelings can easily be hurt. As well, the author shows how the simple act of apologizing can do wonders to resolve such conflicts.

Quill says: A fun story that shows children how easily name-calling can escalate and what to do if such a fight develops.