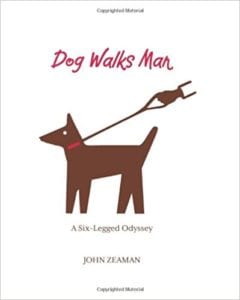 There is a shot of hope, adrenaline, and sheer excitement that a dog brings to every walk. The wagging of the tail is like a sign signaling to the dog-walker - usually a bored man or woman who has something better to do - that something truly great might just happen as they walk the pathways of the world.

John Zeaman perfectly tells a story about the many years that he was part of the dog-walker-father’s fraternity. This group of men he calls, “the brotherhood of dupes,” are the male members of a household who actually were dumb enough to believe their children when they’d begged for a dog and promised with all their hearts that they would take care of said dog and walk him whenever the dog needed to go outside. Of course, as all parents know, the desperate promises of a child are pure lies. John even speaks of the "new guy." He’s the one who always looks like death warmed over as he walks his shiny, happy beagle around the neighborhood at five o-clock in the morning, when he should be back home getting dressed and ready for work.

John is the head of a family of four, although John knows that Mom is really the boss. The Zeaman’s moved from the City to the suburbs where his daughter immediately began to whine about having a pet. Starting slowly, his daughter began with goldfish, graduating to beasts such as the gerbil and guinea pig. Soon, the backyard was turned into a mini-graveyard that the squirrels and raccoons began to dig up and turn into an extremely macabre site.

A Standard Poodle was the Zeaman’s choice. This breed is known to always be calm and prepared, and this particular poodle threw up in the backseat of the car all the way home. The name bestowed upon this new best friend was Peter, a creation loosely based on Bill Murray’s character in Ghostbusters. Peter soon became everyone’s best friend. And John, like most owners, soon discovered that the dog ran the household (i.e., when the dog was on the couch sleeping, instead of disturbing him you took a seat on the floor. The dog is also the one person in the family who can give you “the eyes.” You know? The look that reminds you of a Steven Spielberg movie where the victims were ushered into the gas chamber.

The children always wanted to help out with their new pet, but soon John and Peter became a team, because John was the only one who would march into the freezing cold night in order to allow Peter his chance to explore.

The author speaks hilariously about what owners will do for their dogs. Such as, everyone complains about the dog’s…business being left on the ground. In fact, an owner can get a two thousand dollar fine for not cleaning up after their pet. Whereas in the old days not only dogs, but horses, goats, and all types of animals…business was found on the streets of NYC, and it was absolutely normal to not have a Ziploc bag at hand to clean it up. As John bonds with his own dog he makes some very specific points to the reader. Dogs are the family glue; they literally hold a family together by loving people unconditionally and relieving some of the stress and uncertainty that comes in life.

Through some literally hysterical and heartwarming stories, John Zeaman takes the reader along on his very own odyssey as he explores the world and comes to understand life while talking with Peter, and seeing the excitement of the world through the dog’s eyes.

Quill says: Every line of this amazing book is touching. Dog owners who are truly devoted to their “best friend” will understand and admire every word. This is three hundred and six pages of pure heart.