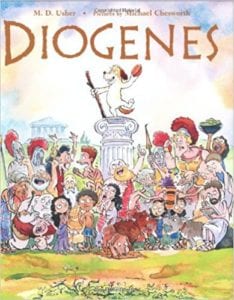 Dogs are dogs are dogs, but Diogenes was definitely a different kind of dog. He had no intention of rolling over for anyone, let alone fetching a bone because "he wanted to be his own master." One day, as he had his face buried in his bowl of food, he noticed a little mouse. The little mouse didn't seem to have a care in the world and Diogenes decided he wanted to be just like that. The next day he gave up all his worldly possessions, meaning a dog house, a collar and leash, and left for Athens, the big city. Without a care in the world - he only had a walking stick and his bowl, which he proudly sported on his head.

The city was stupendous and bursting with activity. Athens would be a great place to try new tricks. He learned to beg for food, sleep in "an old pot," how to deal with the climate, and he even "begged from statues." He certainly was enjoying being his own master and enjoying the simple life. He was a bit of an odd dog, but soon he found fame and many "people traveled from all over to see his latest trick." Even Alexander the Great took an interest in him, but one day the dogsnatcher threw him in a net and took him to the pound. Was this going to be the end of his freedom or was there more in store for Diogenes?

This is a fascinating story of Diogenes, a Greek dog who gave up everything to live like a king. I liked the interesting allusion to the "real" Diogenes in this story, a story that subtly has a lot to tell the young reader. This tale would be an excellent introduction to ancient Greek life in the homeschool or classroom setting. The artwork is animated, lively, and will make the reader chuckle when they see the wide-eyed independent Diogenes at "work." In the afterword there is a concise and very interesting biography about the real Diogenes who "dedicated himself to a life of voluntary poverty and of questioning commonly held practices and beliefs."