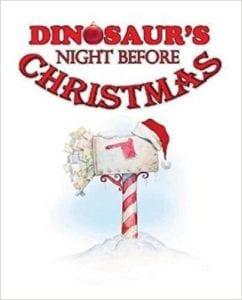 Help! Somebody help! Mean old T-Rex has swallowed Santa Claus and taken his place on Christmas Eve! Hitching his eight misbehaving dinosaur friends to Santa’s sleigh, the naughty crew is off to destroy Christmas. Whatever will we do?! In this hilarious adaptation of Clement Moore’s ‘Twas the Night Before Christmas, author/illustrator Jim Harris weaves an uproarious tale of dinosaurs trying their best to wreck havoc while Santa and Dad do their best to thwart the mischievous creatures’ bad behavior.

While the author, Jim Harris, is listed as an illustrator on the dust-jacket bio, I think he should add poet to his resume. The poem flowed perfectly, with goofy and bizarre words fitting flawlessly into the tale:

“T-Rex! cried Santa, “your time has come.”
(As he made some adjustments to the video gun.)
But Rex roared and charged before Santa could shoot,
So he tossed me the gun as he ran from the brute.”

Santa and Dad are aided by the household pets, a fluffy cat and an adorable, plump basset hound. But it’s up to young Mikey to save the day and put those dastardly dinosaurs in their place. Together with the expressive, fabulously funny artwork that Jim Harris is known for, this is a Christmas story children will want read to them many times.

Quill says: Dinosaur’s Night Before Christmas is an hilarious poem that is sure to get even the grumpiest scrooge in the Christmas spirit!