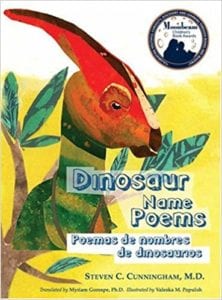 Of course all poets love words. In Dinosaur Name Poems author Steven Cunningham shows us how many different ways there are to love them. Along the way readers will learn about dinosaurs and the field of paleontology.

Mr. Cunningham clearly enjoys rhyme. Dinosaur Name Poems will appeal to any child who loves to come up with rhyming words. Though the author resorts to some awkward syntax in order to get his rhymes, the reader will understand that the fun is in the words themselves. In the poem, “Saurolophus,” for example, Mr. Cunningham uses nine words that rhyme with “crested.” What are they? Nested, congested, infested, requested, rested, ingested, suggested, arrested, and last but not least, protested.

Though Cunningham rhymes also in couplets, he is at his best with these long collections of rhyming words. In “Archaeopteryx,” he has fun with the word “wing.”

“Ancient Wing,”
could you bring
me on a fling?
We'll swing and we'll zing
way beyond T.king.
To the ground he'll cling,
with envy he'll sting
while sweet somgs of spring
to the warm air we'll sing.
What a beautiful thing
to ride your ancient wing.

Dinosaur Name Poems aims to please kids of varying ages and interests. Young children will love the vivid illustrations, which accurately depict the features of each dinosaur while at the same time being brightly colored, imaginative, and sometimes even funny.

As with the illustrations, the text of Dinosaur Name Poems is not all silliness. Each poem begins with a translation of the dinosaur's name. Older kids, and serious dinosaur enthusiasts, can discover more about these names in the Glossary, which is twenty additional illustrated pages. The glossary begins with a definition of “etymology” and then goes on to give the roots, and their definitions, for each name.

For many children this may be a first introduction to etymology-- and also a new way to have fun with words! The glossary section also provides a nice introduction to the field of paleontology. Through an “interesting note” on each dinosaur, the author outlines a brief history of our understanding about the species. It is fascinating to learn about the ways that paleontologist have changed their theories as they find new fossils. Kids will understand that our knowledge of dinosaurs is still growing and might even be inspired to become paleontologists themselves.

As if all this fun with words were not enough, the reader has the added treat of seeing the poems translated into Spanish on the same page. Dinosaur Name Poems would be great for a bilingual classroom. In short kids can learn some Latin, Greek, Spanish and perhaps even discover a love for language, all while having fun with colorful pictures and silly rhymes.

Quill says: A great introduction to etymology that will appeal to kids on several different levels.