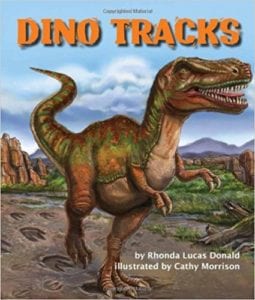 The dinos roamed the banks of the river, their heavy feet sinking into the mud and sands. In time the river would disappear, yet something would remain behind. “T’was quite long ago in Hadley, Mass., / a farm boy plowed a field. / What he turned up, created a fuss -- / what had his work revealed?” The dino footprints made so long ago, had turned to stone. The boy’s eyes widened at the sight of the massive tracks. Three-toed fossilized prints were all around him. What could they tell the world about the dinosaurs that made them? There would be much more to learn than he ever expected.

Some of the dinos traveled alone, while others formed herds. You can even figure out “what it might eat” by looking at the tracks. Amazing! Some of the tracks are massive, while others might only span a few inches. Many at the water’s edge could have been aiming to catch that fish as the dragonfly flitted overhead and the turtle swam beneath the water. “Down by the river where crocs were thick / are tracks of dainty feet. / They skitter on by--it’s best to be sly-- / or hungry crocs they’d meet.” What else could those tracks made long ago tell us about how the dinos lived?

This is a fun look at some of the things fossilized dinosaur tracks can tell us. The amazing full-color, full-page artwork definitely lends a hand in telling the story of those dinos long ago as they made those tracks. The tale itself is a story in rhyme, with ballad stanzas (the 2nd and 4th lines rhyme). Newly independent readers can tackle this beginning nonfiction book with a bit of assistance with unfamiliar words such as “squeezed.” In the back of the book are several activities, including some that can be downloaded and printed from the publisher’s website. This would be an excellent book to read and discuss in the homeschool or classroom setting.

Quill says: If you have a youngster who loves dinos, he or she will be fascinated by what their tracks can tell us!