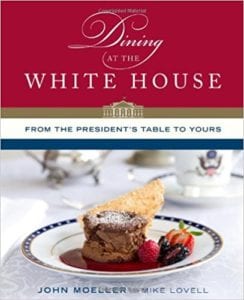 No doubt you’ve seen the delectable meals served at the White House featured in a documentary or perhaps in a few movies. Tantalizing appetizers, scrumptious entrées, and desserts “to die for,” are all important points of these amazing meals. Our mouths have watered but we will, most likely, never get to sample the offerings. Now, however, we have the next best thing, a book that delves into the mystical, and mouth-watering, world of White House meals, written by John Moeller, a chef who had the honor of cooking for three First Families.

Chef John Moeller began his White House career in 1992 as a sous chef (second in command, directly under the executive chef), joining the staff towards the end of the George H.W. Bush Administration, working through the Clinton years and into the George W. Bush presidency. Moeller worked his way up to White House Chef, preparing amazing dishes for dignitaries from around the world.

While the book has over 100 mouth-watering recipes that Moeller created and served at the White House, this is really the story of his time as a chef; his early love for cooking, his training, and the primary focus of the book, his time at the White House.

By high school, Moeller knew that he loved to cook and that he wanted to learn more, thus eventually enrolling in the culinary program at Johnson & Wales University in Rhode Island. A fortuitous trip to Europe upon graduation from culinary school introduced him to some amazing foods, courtesy of England and France. Wanting to improve his skills, Moeller moved to France where he studied both French and cooking. Returning to the States, he worked at various establishments until he re-connected with a previous associate, Pierre Chambrin. Pierre was working as the sous chef at the White House and had just been promoted to executive chef and he needed to hire a new sous chef. Thus began Moeller’s White House career.

The bulk of Dining at the White House is, of course, about Moeller’s experiences at the prestigious address. The book is a treasure-trove of behind-the-scene stories, not just of cooking, but of all things related to what it’s like living in the White House. From increased security measures, to celebrities showing up in the kitchen, this is a great source for enthusiasts of ‘everything White House’ as well as cooking fans. Perhaps what sums it up best is a quote from Moeller where he explains that the staff was serving a “real family in a real home…” but also that “it was like working in a country club with a busy banquet facility.”