Digger and Daisy Go to the Doctor 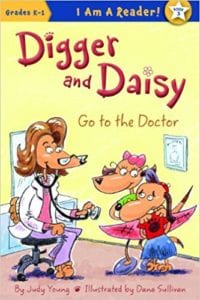 Digger and Daisy Go to the Doctor

It was time to get up, but no way was Digger planning on it. Ugh! That baseball cap wasn’t going on his head because that miserable head was resting on his pillow. Daisy had a mouthful of toothpaste as she stepped into Digger’s room to look at him. “Get up, Digger,” says Daisy / “I do not want to,” Digger says. / “I do not feel good.” Ugh! Digger covered his head with his pillow, but his sister, Daisy, had to take a good look at him. She checked his nose (ouch!) and made him open his mouth so she could check his tongue. Ugh! It did not look good and Digger would have to go to the doctor.

Daisy put Digger in his little red wagon and took him off to the doctor’s office. “I do not want do go,” he exclaimed, “I will get a shot.” Daisy would be right there with him and told him he’d be just fine. Up on the examining table. No! Once Daisy jumped up it wasn’t as scary. “Let me look in your eyes,” said the doctor. No! Daisy let the doctor look in her eyes. On and on they went and each time Daisy would encourage him to be brave. “See, Digger. It does not hurt.” No! Digger was really trying to be brave, but something was going to happen to Daisy. Was she going to be brave or would Digger have to encourage her too?

This is a fun, humorous tale of Digger and his reluctant doctor visit young readers will love. Daisy, a loving supporting sister, tries to help the frightened Digger through his doctor’s exam. She tries to be chipper and very encouraging until the tide is turned. There’s an adorable twist at the end of the book that will make young readers chuckle at Daisy this time instead of Digger. The artwork it bright, colorful, and has that now familiar Digger ‘n Daisy pizzazz I saw in the first book in the series. Digger and Daisy are a brother and sister team that will definitely be a hit series for beginning readers.

Quill says: This is a delightful beginning reader series with a touch of humor young readers will love!