Digger and Daisy Go on a Picnic 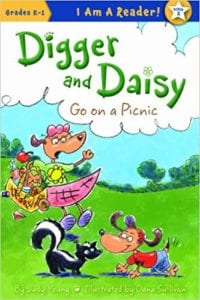 Digger and Daisy Go on a Picnic

Digger licked his chops as he carried an overflowing picnic basket while he ambled behind his sister, Daisy. Yum! Going on a picnic at Barkenton Park would be lots of things. “Daisy likes to look at things. Digger likes to smell things. And he has a very good nose.” Yes, indeed his nose was very good at smelling those nice big lemons on a tree and the flowers in a garden at the park. Digger leaned way over to stick his nose in the flowers, but bzzzzz, watch out! Daisy warned him by saying “Look out! That bee will sting you!” Bzzzzz, be careful Digger!

Daisy and Digger kept on walking and the next thing Digger's nose smelled was something very tasty. That yummy smell was even better than anything in Digger’s picnic basket. That smell was coming from that little yellow house and it was a pie! “Digger puts his nose in the window,” but watch out because that window is coming down. No pie for nosy Digger. Daisy and Digger kept walking through the park, smelling all kinds of interesting things. They found a hole and Digger’s nose went right on in. When it came back out there was dirt up his nose. Oh, no! Digger couldn’t smell anything at all. What was he going to do?

This is a fun, humorous tale of Digger and his big nose young readers will love. Digger is certainly a curious little brother and his older sister, Daisy, is ultra-patient with him. Like many youngsters, Digger is insatiably curious and loves to explore new things. Fortunately his big sister Daisy keeps an eye out for him. There’s an adorable twist at the end of the book that will make young readers chuckle at Digger. The artwork it bright, colorful, and has that Digger ‘n Daisy spunk I saw in the first book in the series. Digger and Daisy are a brother and sister team that will definitely be a hit series for beginning readers.

Quill says: The very youngest readers will love the new sister and brother team, Daisy and Digger, as they are off on their second adventure in the series!