Destiny of a War Veteran 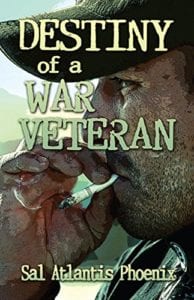 Destiny of a War Veteran

Joe, a Vietnam veteran, has paid a heavy price for his years of military service. Years after the war had ended, he continues to suffer both physically and mentally. Daily life in New York City is a struggle for Joe.

Destiny of a War Veteran begins with Joe reliving the terror of 9/11 from within Tower II. It soon becomes obvious that Joe is having a nightmare as he is carried up to the stars and waking up in a sweat. It is not clear to the reader until a few chapters later that reality and fantasy are also confused in Joe’s mind. Visiting the psychiatry department at a local medical center, Joe embarks on a long conversation with a lovely young psychiatrist. He is concerned because his friend Harry has asked him to participate in a dangerous mission to the Middle East. Should he participate? Should he tell the doctor? More importantly, is the mission real or imagined?

The psychiatrist gives Joe several prescriptions that he regrettably rips to shreds upon leaving the medical center. After a brief interlude in Harlem, Joe makes the decision to accompany Harry to the Middle East where they will attempt to disrupt the imaginary government of the imaginary country of Hajikistan. Long conversations with Harry, Shafiq (“an American camouflaged with ethnicity to play the dirty game”), and other interesting characters provide the backdrop for the destabilization they plan to cause.

Destiny of a War Veteran is not really about the action taking place within the pages of the book but rather the thoughts going through the mind of a man who is suffering terribly from his fight to separate fact from fantasy. At the same time, it is a discussion of political actions that governments have taken, the toll those actions have had on the citizens of said countries, and the devastating effects the quest for power and money has had on the world. Discussions include the manipulation of religion, how to get rid of a dictator, and the long and at times violent history Muslims and Christians have shared.

It takes a bit of time to get into the plot of Destiny of a War Veteran, particularly if you’re not sure whether Joe is in the present, reliving a past experience, or imagining a new journey. Add to this the frequent grammatical errors, - “He saw the man took a hand grenade…” (pg. 134) and it is soon clear that this is not an easy read. However, if you can get beyond the errors and into the rhythm of the story, the discussions Joe has with those around him are thought provoking.

The author has created a believable and sympathetic character in Joe and one that the reader hopes will be able to fight his demons. Wondering what will happen to the tortured war vet keeps the pages turning right up to the surprise, yet poignant ending.

Quill says: A challenging read that questions the political system while also showing the tremendous sacrifices one man has made for his country.

For more information on Destiny of a War Veteran, please visit the book's website at: PublishAmerica.