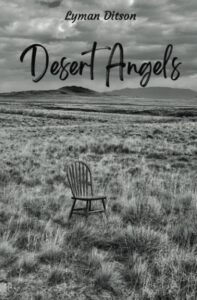 Poet and wordsmith Lyman Ditson has created a fable for mature minds, as he sends his narrator out into the New Mexico desert with his dog, named Lion, for what seems like a typical day’s stroll in his newest offering, Desert Angels.

On this day, though, his life perspective will be torn apart and rebuilt as he encounters various etheric beings. The first is an angel named Boris, who has a slight accent and the amazing ability to remind the man of his past by reciting poems he’d been writing since childhood. As the man recalls the incidents, each quite significant, that evoked his poetic leanings, he becomes convinced of Boris’s powers and is told that he will have a mission now, to travel on a ship…and that dream becomes reality when he and Lion find themselves on board a wooden ship whose captain is a parrot with foggy vision. The parrot tells the desert traveler that he has a chance to live forever. Next, though, he will be led by a vulture to a tomb where, if he wishes to live forever, he must be willing to sleep. It doesn’t seem an attractive proposition, and his unwillingness to believe that it can happen may be the very thing that prevents it from happening.

Further meetings include an egotistic military man who wants to enlist the desert man as a scribe, a voice from a fiery cactus, and a tortoise named Dwayne, wearing tiny red sneakers. Dwayne directs him to find the four Gifted Ones, to decide which gifts he may wish to garner. And sometime in the midst of all this confusion, Lion has started talking, often interrupting and seeming to express the seeker’s conscience. In the end, all our hero really wants to do is find his way home; but in doing so, he must learn to accept who he really is.

Between each of the prose chapters, Ditson has placed poems that elicit the desert man’s feelings about what is happening to him. Is it “a fear so deep that seared my core,” or “the light of the greatest star”? These touches somehow turn the fable into the heartfelt search for identity that the desert man must undergo when his ordinary day is transformed, becoming a visit into a world of archetypes and angels. The author, who himself lives in the desert his narrator walks through, handles this panorama, turning the bizarre meetings into vibrant metaphors enhanced by skillful wordplay and higher truths.

Quill says: Desert Angels is a light-filled, lilting look by gifted poet Ditson, painting a word picture of how it is possible to see oneself when everyday routines are shattered, and fantasy becomes the only reality.