Death With Dignity: The Case for Legalizing Physician-Assisted Dying and Euthanasia 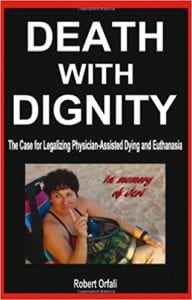 Death With Dignity: The Case for Legalizing Physician-Assisted Dying and Euthanasia

In 2009, author Robert Orfali lost his soul mate Jeri to ovarian cancer. After nine years of battling the disease, Jeri’s fight came to an end in her home, surrounded by friends. With the aid of hospice, Jeri’s late-stage pain was eased but Orfali knew that if she had been allowed to use Nembutal (a life-ending drug), her suffering could have been lessened. This book is Orfali’s tribute to his soul mate, and his effort to get Jeri’s Law, a death with dignity law, passed in his home state of Hawaii.

Death with Dignity is broken down into eight chapters. The reader is first given an overview of how death occurs in the United States today, with examples of terminally ill patients begging family members to end their suffering. This is followed by examples of how some people would prefer to die, specifically in cases of the terminally ill: with dignity and as little suffering as possible. We next learn what hospice offers, how other countries deal with death and euthanasia, the arguments against assisted dying and perhaps the most intriguing chapter of all, point and counterpoint where the author takes on an extensive list of arguments against euthanasia and through research, statistics, and his own personal experiences, debunks those arguments.

Orfali advocates “…the legalization of physician-assisted dying modeled after Oregon’s Death with Dignity Act” (pg. v) and presents many compelling reasons for such a bill in his home state of Hawaii and indeed, for the entire country. It is interesting to note that study after study shows that people overwhelmingly support physician-assisted dying, with some studies reporting upwards of 70% of those polled favoring it. Why then have just three states, Oregon, Washington, and Montana, legalized self-administered, physician-assisted (note: not “physician-administered”) euthanasia? Because, notes Orfali, while the majority of citizens are in favor, they are poorly organized and do little to promote such bills. It is, as the author notes, not a pleasant topic and not one most people want to even talk about, let alone spend time advocating for. In contrast, those opposed to such bills, such as the Catholic Church, pro-life groups, and the American Medical Association "hierarchy," are well-funded and organized. To get any form of euthanasia passed in this country will be an uphill battle.

While hospice offers relief and comfort to many, and the author is at all times respectful and grateful for the aid they gave his soul mate Jeri, he strongly believes that their palliative sedation (sedation to the point of unconsciousness), is not always enough and also finds that not all hospices use palliative sedation. “According to the National Hospice and Palliative Care Organization (NHOCO), its use on terminally-ill patients ‘rangers between 1% and 52%.’” (pg. 60). The author feels that this fact, combined with the NHPCO’s position on limiting palliative sedation to those “imminently dying patients” is not acceptable. More must be done.

As noted earlier, the chapter where the author takes each argument against euthanasia and dismantles them one by one, with facts, studies, anecdotes from other countries and here in the States, is quite interesting. For example, the slippery slope line of reasoning, which was used to argue against Oregon’s bill before it passed, is shown to have no validity. Indeed, since the bill’s passing in 1994, “only 460 patients died using the Act, accounting for 1 in 1000 deaths in Oregon...however, 1 in 50 dying Oregonians now talk to their physician about the possibility…has resulted in a more open conversation about death…” and “…opponents’ dire predictions of a “death stampede” did not materialize.” (pg. 100-101)

There is no doubt that legalizing physician-assisted dying is an emotionally charged issue. To his credit, the author keeps emotions at bay and instead uses his analytical skills, born from his experiences as a client/server programmer, to deal with the subject matter logically. While you may not agree with each and every point Orfali puts forth, this book will definitely make you think and possibly re-examine how you feel about euthanasia.

Quill says: Regardless of which side of the debate you are on, you will find this book a compelling, and well-researched, case for legalizing physician-assisted dying.

For more information on Death With Dignity: The Case for Legalizing Physician-Assisted Dying and Euthanasia, please visit the book's website at: www.DeathwithDignityBook.com