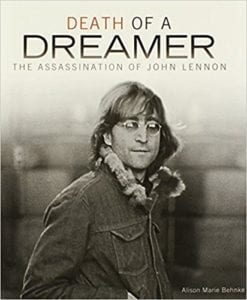 Julia was married to Alfred Lennon, a military man in Britain's Merchant Navy. When their son John was born on October 9, 1940, the "young, fun-loving, and not very responsible Julia struggled to care for her baby alone." John's Aunt Mimi, on the other hand, was responsible and soon took him home to raise him. He wasn't exactly an easy child nor a "model student," but his Aunt Mimi and her husband George Smith loved and cared for him. It wasn't until much later when John became interested in music that he and his mother Julia began to bond.

When John was in high school he and several friends formed a band called the "Quarrymen." Skiffle, a popular type of music at the time, was based on a combination of "jazz, blues, and folk music." It even boasted a member who played a washboard, but soon John was looking for guitar players and a drummer. It wasn't long before Paul McCartney, George Harrison and Pete Best joined forces. When his mother Julia was killed by a drunk driver, the seventeen-year-old "sought comfort in music." The band, renamed the "Silver Beetles" in May 1960, was soon in demand, playing more than two hundred shows at the Cavern.

Richard Starkey, Ringo, replaced Best, John began a family, they gained a manager, Brian Epstein, and the band became known as the "Beatles." Quickly and unexpectedly the band became famous and Beatlemania had set in. With their arrival in the United States, "the frenzy surrounding each public appearance," according to John, was "like being in the eye of a hurricane." The drudgery of playing soon set in and the "magic of playing live faded away." The band began to change with the death of Brian Epstein and, to the woe of the other band members, when John became enamored with the lovely Yoko Ono.

Once the band disbanded, John began his life with Yoko and newborn son, Sean. Perhaps because he "grew up during a period of great change and upheaval," he became interested in becoming a figurehead for peace along with Yoko. The U.S. government was monitoring the couple and they were "judged as both undesirable and dangerous agents." Deportation seemed imminent. John claimed, "I am going into an unknown future, but I'm still all here. And still where there's life, there's hope." Someone else too was watching John closely and that was Mark David Chapman. In this book you will hear the rest of John's story and that of Mark's, the man who took his life in front of the Dakota on December 8, 1980.

In essence, this book is divided into two sections, the first covering John's life, the second David's. The biographical material was draw from several sources and masterfully blended into these pages. Many, who have formed their own opinions about Chapman, will find an unbiased look at his life and unfortunate obsession with Lennon. I enjoyed reading about Lennon's life and especially enjoyed learning about his activism. There are black and white photographs scattered throughout these pages and numerous informative sidebars. For example, under one entitled "Public Enemy," we learn why Chapman was kept in solitary confinement. In the back of the book is an index, a timeline (1940 to 2011), a "Who's Who?" listing, extensive source notes, a selected bibliography, and additional recommended book, websites, dicography, and filmography resources to explore.

Quill says: This is a fascinating look at John Lennon and Mark David Chapman, the man who took Lennon's life.