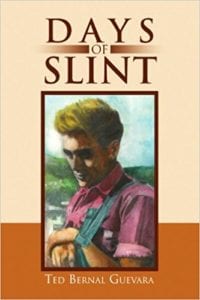 Haim Shipp is a young African American man from Detroit who has moved to Synon, Indiana to attend college. Excited about his courses, Haim is, unfortunately, about to also experience racism from many of the residents of this small community.

The year is 1948 and Haim has been given a scholarship to the local college as a way to make amends for the town’s past deeds – 18 years earlier an angry mob lynched Haim’s uncle. He was even given the loan of a new Mercury by the local Ford dealership. Haim never met his late uncle, but appreciated the fact that he could earn an education from his uncle's tragic death.

Early in the first semester, Haim meets 17-year-old James Dean. Dean is immediately taken by Haim’s ’48 Mercury while Haim is intrigued by the future actor’s motorcycle, a Czech C/Z. Unlike so many of the town’s residents, Dean doesn’t notice the color of Haim’s skin, he simply sees a fellow car lover. The two soon become good friends.

Days of Slint is written in the first person, with the narrator’s voice changing, from chapter to chapter, between four main characters and a multitude of minor individuals. The main players are Haim, his girlfriend Michelle, James Dean and Ms. Mel, a teacher whom Dean admires greatly.

As the story progresses, we see the development of Haim and Dean’s friendship and glimpses of the daily lives of the main characters. Michelle, or Chel to her friends, seems intent on proving Haim has eyes for another woman while Ms. Mel battles her feelings for young James Dean and Erael, the man she plans to marry.

What really makes this book work is the author’s use of so many narrators. In some spots, we see events through the eyes of two African Americans, Haim and Michelle, where they are treated abhorrently simply because of the color of their skin. Next, we’re shown the same event through the eyes of the perpetrator. In other sections, we see the flow of time from character to character, with interpretations changing to match the bigotry or innocence, of the narrator. It’s a fascinating look at human nature.

If you’re a reader who likes a book with a lot of action and plot twists, this may not be the right book for you. However, if you prefer a story that really makes you stop and think, you should consider Days of Slint. The author does an excellent job of drawing out the feelings of both the characters and readers. You will smile as you read some parts and froth with anger at others. As for the title? While it may sound strange, it will make perfect sense as you finish this book, which has an unexpected and powerful ending.

It should be mentioned that the text would benefit from an editor’s hand as there are a fair number of typos in the text – “I’m just concern about you…” (pg. 223) A careful editing would add to the overall readability of this book.

Quill says: Days of Slint is a powerful reminder of the dark days of deep hatred that have plagued this country.

For more information on Days of Slint, please visit Xlibris.com