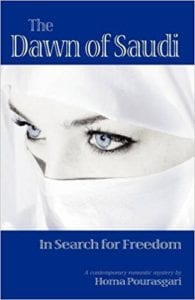 From the outside, the worlds inhabited by the characters are luxurious and opulent in Homa Pourasgari’s contemporary romantic mystery novel The Dawn of Saudi: In Search of Freedom. These are worlds of silk and cashmere, personal maids and gardeners, fine china and gems. However, their interior worlds are spare and sparse, often stripped of one of the most priceless gifts of all, freedom.

The central character of The Dawn of Saudi is Sahar, a young Saudi woman who is being forced to marry a much-older man she doesn’t know, not to mention love or even like. Through Sahar’s eyes, we see the gross injustices inflicted upon most Saudi women, who as described by Sahar’s grandfather, are merely “precious commodities who bore sons and could be traded to make deals. If they failed to carry out these two obligations, they were worthless.” When Sahar’s American friend Dawn plans on marrying a Saudi man, Sahar darkly warns her, “…in Riyadh all your freedoms will be taken away. You will not be able to drink sangrias. You will not be allowed to leave the house without a mahram – a guardian – who would either be your husband or a close male relative like a brother or an uncle. You will not even be allowed to drive or ride a bicycle."

Just as it is hard for Dawn to believe such hideous inequalities still exist in such a prosperous country, many American readers may hold the same skepticism while reading this book. Dawn learns the harshest lesson of all once she gets to Saudi Arabia. Likewise, readers learn through this book about the state of women’s rights in Saudi Arabia.

First and foremost however, The Dawn of Saudi is a fictional tale with juicy bits of romance, intrigue and mystery all rolled into one book. The author generously provides colorful detailing to many aspects of Saudi life, such as traditional dress, foods, traditions and customs in a way that bring authenticity and richness to this story. In addition, readers are treated to a push me-pull me romantic love affair that keeps the tension mounting throughout the story as we wonder will they or won’t they give into true love.

Indeed Homa Pourasgari is a skilled storyteller who effectively weaves together parallel narratives that continue to keep the pages turning eagerly. In the beginning of the book, readers follow Sahar’s agonizing journey as she tries in vain to extricate herself from forced marriage and Dawn’s life as she grapples with the horrific challenges of her Saudi marriage. Then Pourasgari introduces a related storyline of the rich and powerful Jason Crawford III, a young man living a life of boundless wealth in Los Angeles who nevertheless suffers under the burden of his own familial confines. Halfway through the book, the tone changes from drama and romance to a suspenseful mystery as antagonists threaten the main character’s freedom…and life. The wonderful surprise twist in the plot easily propels readers through the last section of the book.

In her effort to shed cold light on the astounding lack of women’s rights in Saudi Arabia, at times Pourasgari draws her characters in black and white alone. Many of the male Saudis are depicted as wife-beaters, rapists and arms dealers while the Saudi women are often shown as “brainwashed” or helplessly resigned to their unfortunate fate. Most Muslims are portrayed as extremists. Not until the end of the book does the author reveal that not all Saudi women are subjected to such appalling injustices and times are ever so slowly beginning to change in Saudi Arabia. Nevertheless, Pourasgari’s use of overly broad strokes is understandable as she daringly takes on the challenge of using a romantic mystery to enlighten readers to a difficult and complicated issue. Certainly the state of women’s rights in Saudi Arabia – or abject lack thereof – remains a highly complex crisis with no easy or quick solution. In the end of this book, the author steps out of her role as storyteller to directly encourages activism and hope, “Although fighting corruption and injustice may be an overwhelming task we can no longer afford to walk around with blinders…We all need to come together as a society to do more.”

At its core, The Dawn of Saudi is a cautionary tale about freedom. While the female characters in Saudi Arabia have their freedom wrenched violently away from them, the American characters toil away under the class- or even self-imposed restrictions of our society. As such, Pourasgari spurs readers to question what is freedom and who really are the wardens of our personal prisons.

Quill says: The Dawn of Saudi is a romantic mystery that elucidates and educates as it entertains.

For more information on The Dawn of Saudi, please visit the book's website at: The DawnofSaudi.com.